It’s been two years since my first DIY closed loop and almost two years since OpenAPS (the vision and resulting ecosystem to help make artificial pancreas technology, DIY or otherwise, more quickly available to more people living with diabetes) was created.  I’ve spent time here (on DIYPS.org) talking about a variety of things that are applicable to people who are DIY closed looping, but also focusing on things (like how to “soak” a CGM sensorr and how to do “eating soon” mode) that may be (in my opinion) universally applicable. 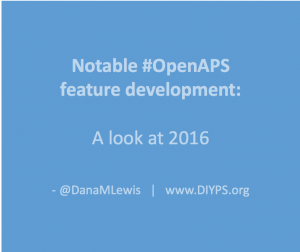 However, I think it’s worth recapping some of the amazing work that’s been done in the OpenAPS ecosystem over the past year, sometimes behind the scenes, because there are some key features and tools that have been added in that seem small, but are really impactful for people living with DIY closed loops.

..and that was all just things the community has done in 2016!

There are some other exciting things that are in development and being tested right now by the community, and I look forward to sharing more as this advanced algorithm development continues.

3 thoughts on “OpenAPS feature development in 2016”