What if, instead of guessing needed changes (the current most used method) basal rates, ISF, and carb ratios…we could use data to empirically determine how these ratios should be adjusted? 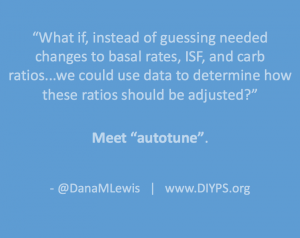 Historically, most people have guessed basal rates, ISF, and carb ratios. Their doctors may use things like the “rule of 1500” or “1800” or body weight. But, that’s all a general starting place. Over time, people have to manually tweak these underlying basals and ratios in order to best live life with type 1 diabetes. It’s hard to do this manually, and know if you’re overcompensating with meal boluses (aka an incorrect carb ratio) for basal, or over-basaling to compensate for meal times or an incorrect ISF.

And why do these values matter?

It’s not just about manually dosing with this information. But importantly, for most DIY closed loops (like #OpenAPS), dose adjustments are made based on the underlying basals, ISF, and carb ratio. For someone with reasonably tuned basals and ratios, that’s works great. But for someone with values that are way off, it means the system can’t help them adjust as much as someone with well-tuned values. It’ll still help, but it’ll be a fraction as powerful as it could be for that person.

There wasn’t much we could do about that…at first. We designed OpenAPS to fall back to whatever values people had in their pumps, because that’s what the person/their doctor had decided was best. However, we know some people’s aren’t that great, for a variety of reasons. (Growth, activity changes, hormonal cycles, diet and lifestyle changes – to name a few. Aka, life.)

With autosensitivity, we were able to start to assess when actual BG deltas were off compared to what the system predicted should be happening. And with that assessment, it would dynamically adjust ISF, basals, and targets to adjust. However, a common reaction was people seeing the autosens result (based on 24 hours data) and assume that mean that their underlying ISF/basal should be changed. But that’s not the case for two reasons. First, a 24 hour period shouldn’t be what determines those changes. Second, with autosens we cannot tell apart the effects of basals vs. the effect of ISF.

Autotune, by contrast, is designed to iteratively adjust basals, ISF, and carb ratio over the course of weeks – based on a longer stretch of data. Because it makes changes more slowly than autosens, autotune ends up drawing on a larger pool of data, and is therefore able to differentiate whether and how basals and/or ISF need to be adjusted, and also whether carb ratio needs to be changed. Whereas we don’t recommend changing basals or ISF based on the output of autosens (because it’s only looking at 24h of data, and can’t tell apart the effects of basals vs. the effect of ISF), autotune is intended to be used to help guide basal, ISF, and carb ratio changes because it’s tracking trends over a large period of time.

Ideally, for those of us using DIY closed loops like OpenAPS, you can run autotune iteratively inside the closed loop, and let it tune basals, ISF, and carb ratio nightly and use those updated settings automatically. Like autosens, and everything else in OpenAPS, there are safety caps. Therefore, none of these parameters can be tuned beyond 20-30% from the underlying pump values. If someone’s autotune keeps recommending the maximum (20% more resistant, or 30% more sensitive) change over time, then it’s worth a conversation with their doctor about whether your underlying values need changing on the pump – and the person can take this report in to start the discussion.

Not everyone will want to let it run iteratively, though – not to mention, we want it to be useful to anyone, regardless of which DIY closed loop they choose to use – or not! Ideally, this can be run one-off by anyone with Nightscout data of BG and insulin treatments. (Note – I wrote this blog post on a Friday night saying “There’s still some more work that needs to be done to make it easier to run as a one-off (and test it with people who aren’t looping but have the right data)…but this is the goal of autotune!” And as by Saturday morning, we had volunteers who sat down with us and within 1-2 hours had it figured out and documented! True #WeAreNotWaiting. :))

And from what we know, this may be the first tool to help actually make data-driven recommendations on how to change basal rates, ISF, and carb ratios.

(See more about how to run autotune here in the OpenAPS docs.)

Here’s an example of autotune output. 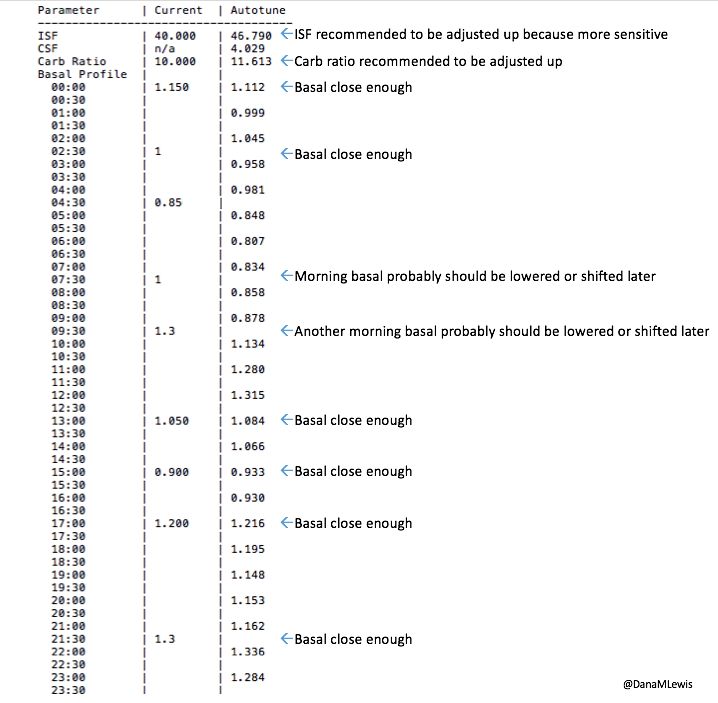 Autotune is one of the things Scott and I spent time on over the holidays (and hinted about at the end of my development review of 2016 for OpenAPS). As always with #OpenAPS, it’s awesome to take an idea, get it coded up, get it tested with some early adopters/other developers within days, and continue to improve it!

A big thank you to those who’ve been testing and helping iterate on autotune (and of course, all other things OpenAPS). It’s currently in the dev branch of oref0 for anyone who wants to try it out, either one-off or for part of their dev loop. Documentation is currently here, and this is the issue in Github for logging feedback/input, along with sharing and asking questions as always in Gitter!

9 thoughts on “Autotune (automatically assessing basal rates, ISF, and carb ratio with #OpenAPS – and even without it!)”