Today I saw that Medtronic announced a partnership with IBM. You can read about it on Twitter, where I first saw it, or elsewhere online. There’s lots of news articles and PR about it, too, which I haven’t read yet in great detail. 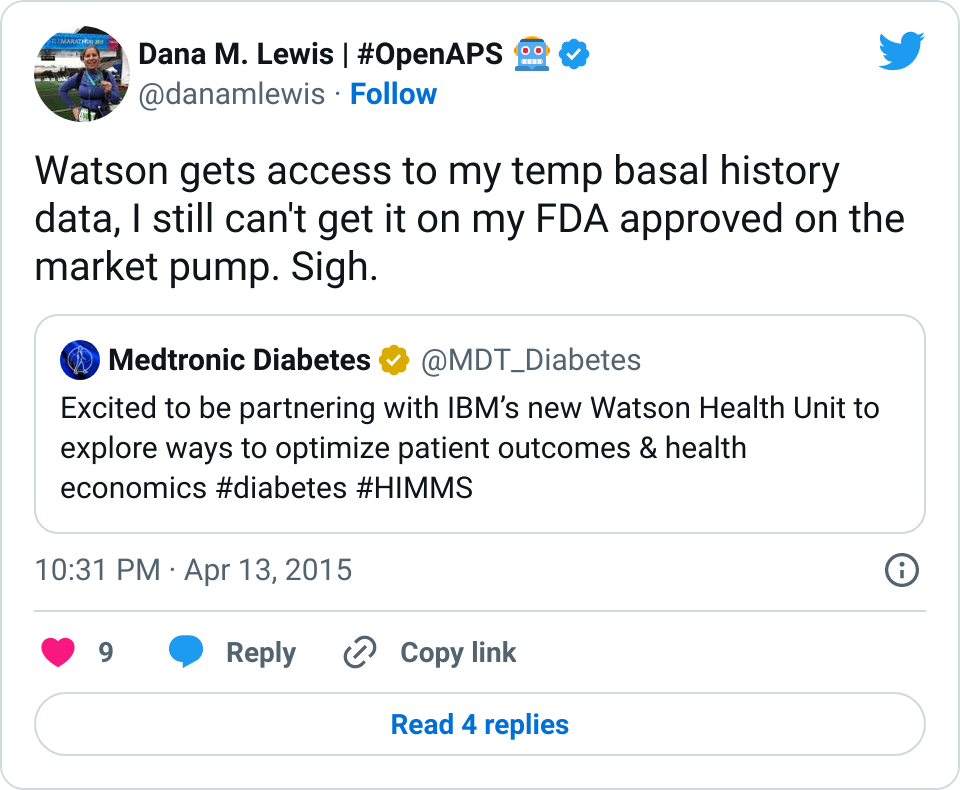 When I reduce my insulin (either by “suspending” the pump’s activity altogether, or by reducing my basal rate with a “temp” or temporary basal rate), there’s no record of it visible on my insulin pump.

Suspended for 15 minutes while I’m in the shower? No record of it if I accidentally resume insulin activity before checking to see when I suspended it.

Same for if I go running and activate a reduce basal rate (again, a “temp”) of 0.3u/hour instead of my usual 1.3/hour. That’s 1u less of insulin than I normally get. If I cancel it, or if that hour ends without me noticing it?

No record at all.

Which means if my blood glucose skyrockets an hour later, it will take me much longer to catch up with insulin if I don’t realize that I’m -1u (negative one unit) below what my body is used to.

Suspending your pump for 3 hours to go swimming? Same deal. Your body has less insulin than it’s used to, but you have to manually and mentally keep track of it.

The reverse is true as well – if you are sick and your body is more resistant to insulin than usual, and you use a higher basal rate than your usual as a way to additionally correct for a high BG?

No record of the additional insulin you’re putting into your body above your baseline basal profile.

And yet this is the FDA approved medical device that everyone is happy that I’m using? Even with critical flaws that endanger my life every day?

And the world has a problem with patients “hacking” or otherwise finding ways to access this critical data since we can’t get it from our approved devices?

Medtronic and other pump brands track how much “insulin on board” (aka IOB) you have…but this number is wrong, because it doesn’t calculate the lack of insulin if you adjust your basal rates (examples above).

This is something I’ve been doing with #DIYPS to compensate for the inaccessibility of data from my FDA-approved medical device. Instead, I have to calculate for myself the “net” IOB number that takes into account any ‘negative’ corrections from suspending or negative or positive temp basal rates. These make a huge difference in my diabetes care.

We’ve learned from talking to people about #DIYPS for a year and a half that many people don’t use temporary basal rates, even though they’re very effective to ward off future lows and highs.

I don’t understand why the pump companies seem to ignore this. (If someone has a pump that tracks net IOB and/or shows a history of temporary basal rates and suspension, let me know. I’m familiar mainly with Medtronic’s pumps.)

This is not ok.

So while I think there’s a lot of potential for Medtronic to do more things with diabetes data (like this or this) through this partnership with IBM’s Watson? In the meantime, I’d like them to start with something much more simple – and with guaranteed impact.

Give me, the patient, my data that I need – directly on my medical device – so I can safely take care of myself and better manage my diabetes.

(Note – I realize FDA approval cycles on pumps take a long time, and this is unlikely to get fixed in current pumps. But future pumps? This should be fixed across the industry. And in the meantime? Companies can and should make it much easier to access data from the pumps via their approved uploader methods and make it easier to read the data. Right now, it’s not even easy to see the data off your pump. Let’s change this.)

I had a conversation this week with someone in the CGM in the Cloud Facebook group, after they indicated they wouldn’t be (or maybe weren’t interested in) joining the “dev” group for #OpenAPS – and it’s a conversation I find myself having often. Here’s what I usually end up saying, when someone says they’re not a “dev” or “not an engineer” or something similar:

“I’m not a formally trained developer/coder/engineer, either… but I keep telling people, many people in this project aren’t- it’s a passion project where we learn what we need to learn to do the things we want to do. It’s fine if someone chooses not to do something, but I encourage everyone to not let labels or perceptions of traditional roles stop them from jumping in and giving it a try to see what they can learn and thus do! Especially with this awesome supportive community of people willing to help you as you go.”

This also came up when we were discussing what it takes to be a “maker” on TEDMED’s #GreatChallenges live panel today. One of my excellent fellow panelists (Cole) pointed out that pretty much everyone is a maker – whether you tweak a recipe, work with wood, or find any kind of workaround of any sort to make things work. (Which in my mind makes every single person with diabetes a “maker” and probably anyone with any disease or health care condition that they live with.)

I previously wrote about what it takes to DIY from a DIYPS and #OpenAPS perspective (and why that’s important), but I think it holds true across any aspect of diabetes or any other disease state – and definitely beyond healthcare: 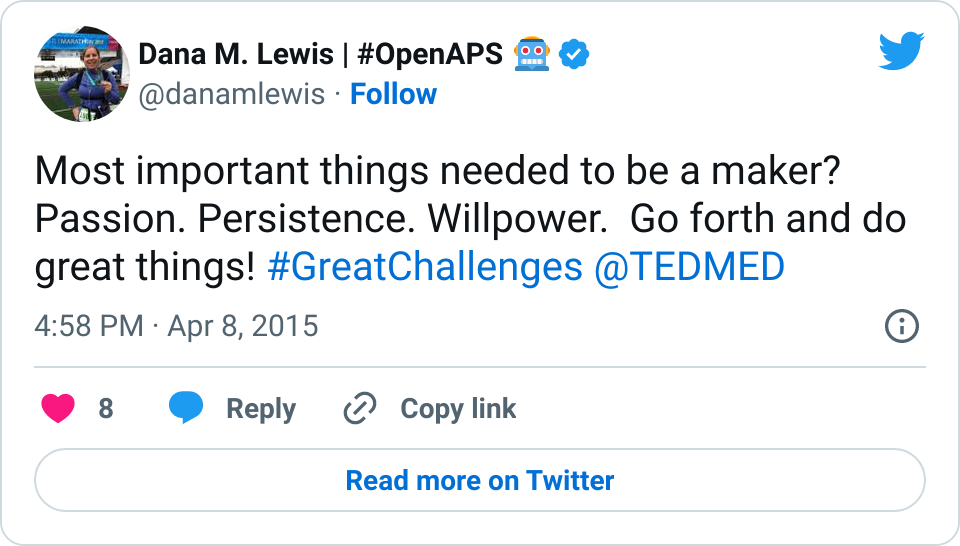 So please, don’t let labels stop you from DOING. You can learn whatever tech skills you set your mind to. You can find numerous ways to solve a problem, whether it’s on your own or by partnering with someone else – and there’s plenty of people with the skills who are willing to help you learn, too.Remember, we started building #DIYPS to make louder CGM alarms. Scott and I have both learned numerous new things and new programming languages and skills along the way as we went from alarms to an alert and recommendation system to a closed loop artificial pancreas (and now people who own 4 Raspberry Pis). We didn’t come to the table with knowledge of everything we needed to know to do what we first wanted to do – and we’re definitely still learning a dozen or more things (programming languages, new software, etc.) along the way as we continue with #OpenAPS. We also didn’t know anything previously about working directly with the FDA – and now we are, on a number of projects, in order to help scale from n=1 of a DIY artificial pancreas to many n=1s around the world.

You can do this. Bring your passion, and go do great things!