(You can also see a Twitter thread here summarizing the study results, if you are interested in sharing the study with your networks.)

TLDR: The CREATE Trial was a multi-site, open-labeled, randomized, parallel-group, 24-week superiority trial evaluating the efficacy and safety of an open-source AID system using the OpenAPS algorithm in a modified version of AndroidAPS. Our study found that across children and adults, the percentage of time that the glucose level was in the target range of 3.9-10mmol/L [70-180mg/dL] was 14 percentage points higher among those who used the open-source AID system (95% confidence interval [CI], 9.2 to 18.8; P<0.001) compared to those who used sensor augmented pump therapy; a difference that corresponds to 3 hours 21 minutes more time spent in target range per day. The system did not contribute to any additional hypoglycemia. Glycemic improvements were evident within the first week and were maintained over the 24-week trial. This illustrates that all people with T1D, irrespective of their level of engagement with diabetes self-care and/or previous glycemic outcomes, stand to benefit from AID. This study concluded that open-source AID using the OpenAPS algorithm within a modified version of AndroidAPS, a widely used open-source AID solution, is efficacious and safe.

The backstory on this study

We developed the first open source AID in late 2014 and shared it with the world as OpenAPS in February 2015. It went from n=1 to (n=1)*2 and up from there. Over time, there were requests for data to help answer the question “how do you know it works (for anybody else)?”. This led to the first survey in the OpenAPS community (published here), followed by additional retrospective studies such as this one analyzing data donated by the community,  prospective studies, and even an in silico study of the algorithm. Thousands of users chose open source AID, first because there was no commercial AID, and later because open source AID such as the OpenAPS algorithm was more advanced or had interoperability features or other benefits such as quality of life improvements that they could not find in commercial AID (or because they were still restricted from being able to access or afford commercial AID options). The pile of evidence kept growing, and each study has shown safety and efficacy matching or surpassing commercial AID systems (such as in this study), yet still, there was always the “but there’s no RCT showing safety!” response.

After Martin de Bock saw me present about OpenAPS and open source AID at ADA Scientific Sessions in 2018, we literally spent an evening at the dinner table drawing the OpenAPS algorithm on a napkin at the table to illustrate how OpenAPS works in fine grained detail (as much as one can do on napkin drawings!) and dreamed up the idea of an RCT in New Zealand to study the open source AID system so many were using. We sought and were granted funding by New Zealand’s Health Research Council, published our protocol, and commenced the study.

This is my high level summary of the study and some significant aspects of it.

This study was a 24-week, multi-centre randomized controlled trial in children (7–15 years) and adults (16–70 years) with type 1 diabetes comparing open-source AID (using the OpenAPS algorithm within a version of AndroidAPS implemented in a smartphone with the DANA-i™ insulin pump and Dexcom G6® CGM), to sensor augmented pump therapy. The primary outcome was change in the percent of time in target sensor glucose range (3.9-10mmol/L [70-180mg/dL]) from run-in to the last two weeks of the randomized controlled trial.

Mean time in range at study end for the control arm was 56.5±14.2% and 52.5±17.5% for adults and children respectively, with no improvement from run-in. No severe hypoglycemic or DKA events occurred in either arm. Two participants (one adult and one child) withdrew from AID due to frustrations with hardware issues. 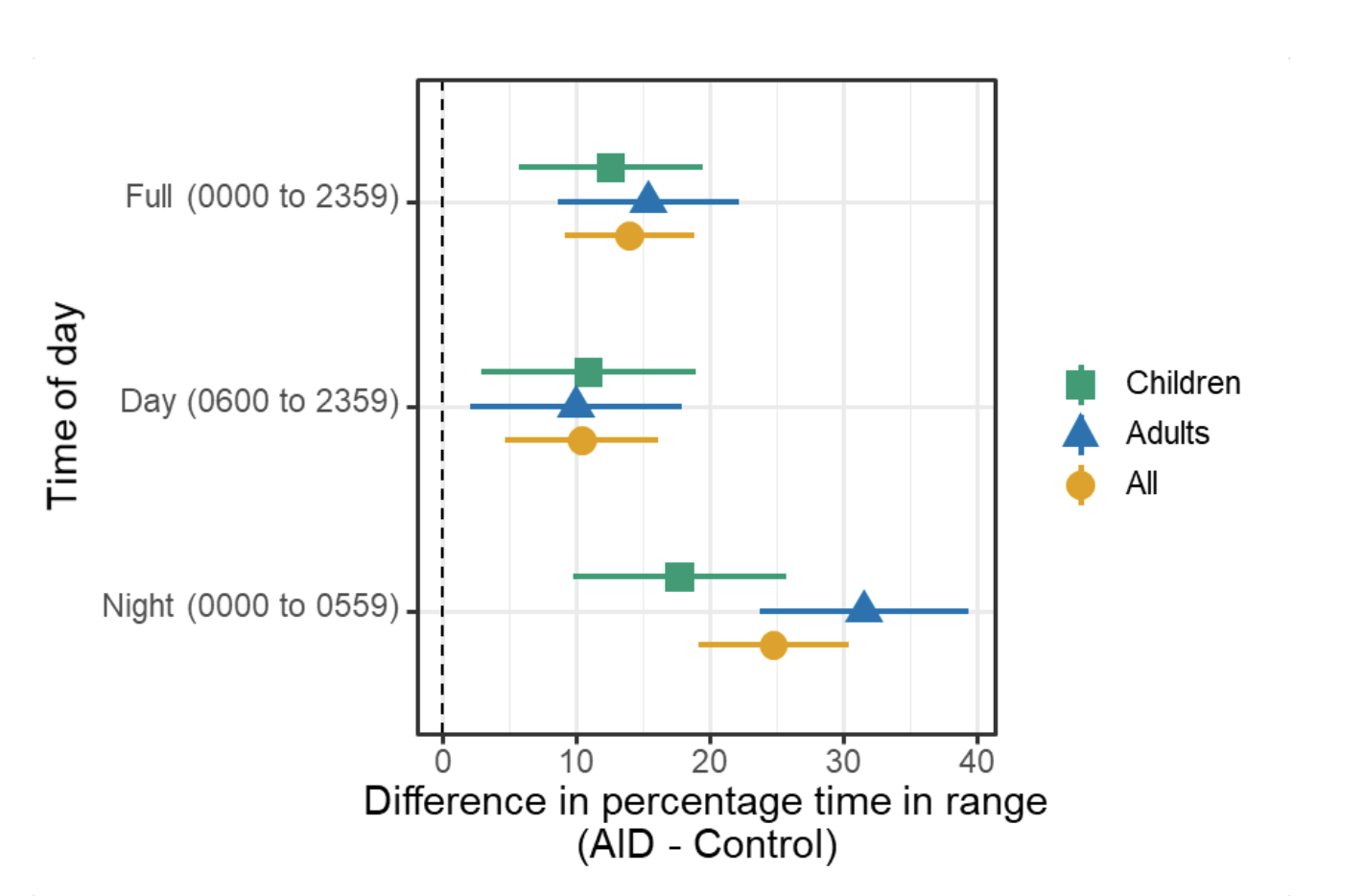 One thing I think is worth making note of is that one criticism of previous studies with open source AID is regarding the self-selection effect. There is the theory that people do better with open source AID because of self-selection and self-motivation. However, the CREATE study recruited a diverse cohort of participants, and the study findings (as described above) match all previous reports of safety and efficacy outcomes from previous studies. The CREATE study also found that the greatest improvements in TIR were seen in participants with lowest TIR at baseline. This means one major finding of the CREATE study is that all people with T1D, irrespective of their level of engagement with diabetes self-care and/or previous glycemic outcomes, stand to benefit from AID.

This therefore means there should be NO gatekeeping by healthcare providers or the healthcare system to restrict AID technology from people with insulin-requiring diabetes, regardless of their outcomes or experiences with previous diabetes treatment modalities.

There is also no age effect observed in the trail, meaning that the results of the CREATE Trial demonstrated that open-source AID is safe and effective in children and adults with type 1 diabetes. If someone wants to use open source AID, they would likely benefit, regardless of age or past diabetes experiences. If they don’t want to use open source AID or commercial AID…they don’t have to! But the choice should 100% be theirs.

Huge thanks to each and every participant and their families for their contributions to this study! And ditto, big thanks to the amazing, multidisciplinary CREATE study team for their work on this study.

Note that the continuation phase study results are slated to be presented this fall at another conference! 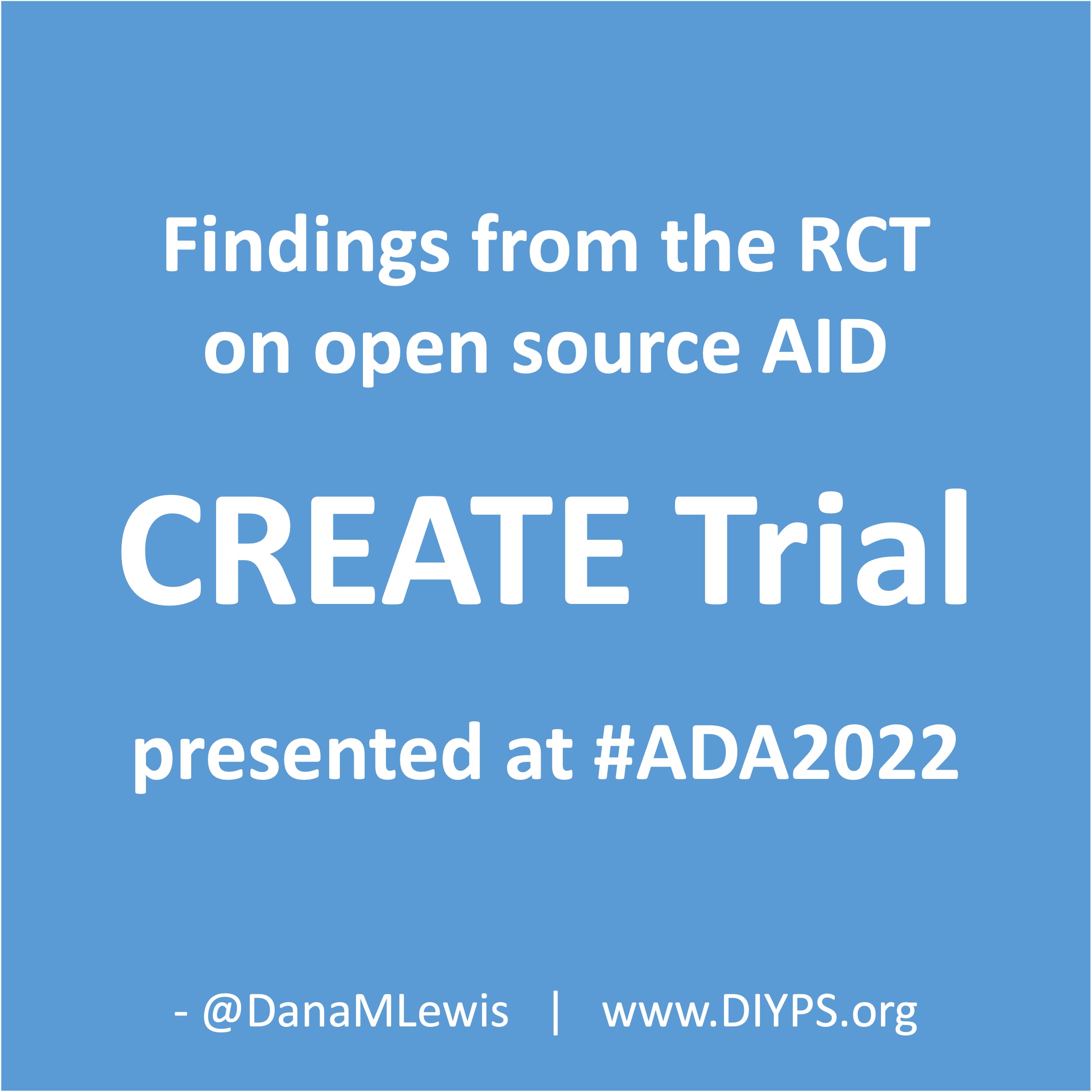