Exocrine Pancreatic Insufficiency (EPI or PEI) is an invisible disease – you don’t see or hear much of it and there’s not a lot of information for patients online, nor information written by people with EPI. (That’s in part why I’ve been documenting my experiences with EPI – more at DIYPS.org/EPI if you want to see the other EPI-related posts that I’ve written).

I’ve now spent more than 4 months with (known) EPI and taking pancreatic enzyme replacement therapy (PERT), and I’m sharing what I’ve found so far that’s worked for me. I also wanted to share an update on my experiences and what I wish I had known at the start that I know now.

Mainly, it gets better. It gets easier. 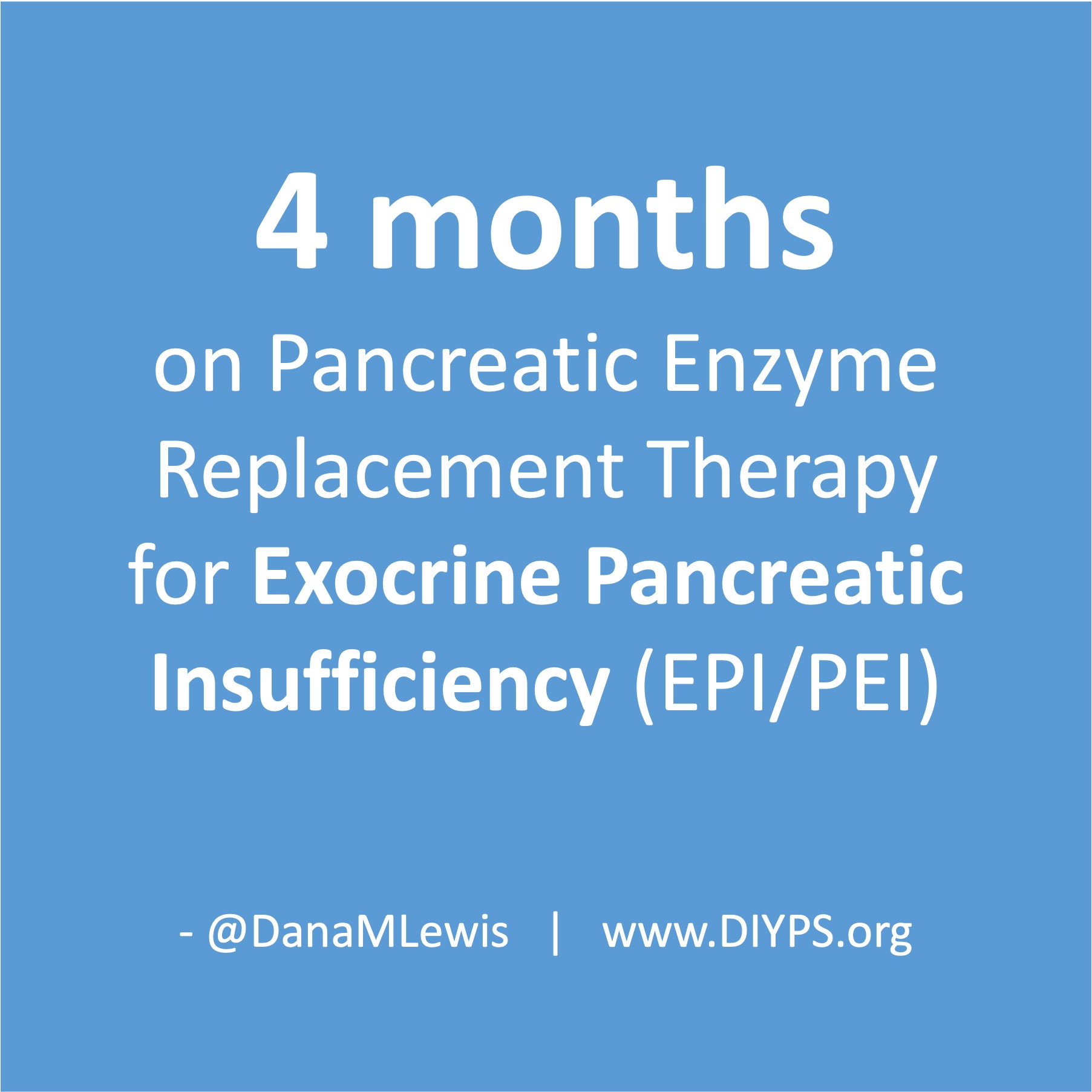 “It” being how I felt and now feel, and the process of figuring out how much enzymes to take, and the process of working more math into the choices of what, when, and how I was eating. It’s a lot of work, but it has gotten easier. And I feel a lot better. I now have multi-week streaks where I have perfect dosing for everything that I eat and dose for, and it’s rare to not get it right.

The early weeks were not this great: I definitely felt better than before, but not “back to normal”.

Now, I feel “back to normal” like I think I did 2-3 years ago before symptoms became noticeable. When I don’t manage to dose perfectly, the symptoms are way more minimal than previously, in part due to the fact that I’ve had so many days of feeling great and in part due to the fact that the margin of error is a lot smaller since I’ve figured out a good ratio of lipase:fat and protease:protein that works well and reliably for me.

This has confirmed for me that titrating doses of enzyme does matter. I documented everything I was eating (including listing out the amount of fat and protein) and the amount/level of enzymes I was taking. Over time, I was able to see a general threshold above/below which dosing usually worked or didn’t work, and then test slightly smaller amounts of fat and/or protein to get to an amount that reliably “worked” with that size of enzyme dose. From there, it was simple math to divide the thousand units of lipase in that size of enzyme dose by the grams of fat or protein to identify the ratio of fat:lipase or protein:protease that I needed. This has helped me get the right dose of enzymes for every meal. It has also enabled me to then choose between the more expensive and higher-dose prescription enzyme pills I have, or choose a combination of prescription and smaller-dose single or multi-enzyme over the counter pills. This ends up giving me more flexibility in the cost of enzymes it takes to cover the food I want to eat (or snack, or treat, or whatever) as well as more precision with dosing the right level of enzyme instead of 1x, 2x, 3x (etc.) a single dose size prescription pill.

In addition to feeling a lot better simply by having better GI-related outcomes and massive reduction in symptoms 95% of the time, my energy levels are way up. I’m also training to run an ultramarathon again this year, and the way I feel during training this year (with enzymes) compared to last year is startling. Even though I have another year’s worth of experience running that I didn’t have last year, the way I feel during and after runs is likely more attributable to the fact that I’m now digesting what I’m eating.

Additionally, the diversity of food that I’m choosing to eat is increasing constantly. I started conservatively, in part due to trying to figure out if I still had any FODMAP-related sensitivity, and also to make it easier to get the math “right” to figure out my optimal dose. As I got confident with my ratios and dosing PERT, I began eating a wider selection of foods, and finally have eaten my way back to eating actual onions (!) in the form of gluten free onion rings. They were delicious, and gave me zero problems. So I’m now confident the FODMAP-perceived sensitivities was really the increasing sensitivity to fat and protein as my elastase levels were dropping. It’s wonderful to not be as restricted in my food options. (I still have celiac disease and eat 100% gluten free and can’t have any cross-contamination, but after almost a year of not eating onion or garlic in any form including “natural flavors” of foods… “just” eating gluten free feels amazingly plentiful in options now.)

And because I’ve eaten more and a greater selection of foods, the thought of eating food doesn’t scare me anymore. I don’t cringe at the thought of actually eating, like I used to. I know it’s a matter of estimating or counting the fat and protein and dosing for it. If in doubt, I try to round up the number of pills I’m taking to provide a buffer. Unlike insulin, taking a little too much enzyme doesn’t hurt (other than the cost). But also like insulin (after almost 20 years), I am no longer counting the cost of every dose in my head with every meal. That definitely took over 3 months, because before then I was swallowing a PERT pill and knowing each and every one costs $9. Ugh. So that’s an improvement, even though I’m still aware of the cost, it’s not quite as bothersome to me on an every-instance basis.

Things aren’t perfect, though, despite it being a lot better. I still get overwhelmed sometimes by the amount of work to decide what I want to eat and how I’m going to estimate what is in it to try to figure out how much PERT to dose.

Some of the strategies I’ve identified that help reduce being overwhelmed include:

Managing decision fatigue is now the biggest hassle for me. I have developed a nice routine for taking counts and converting that to the right PERT doses, but I still get frustrated with having to think about what I’m eating and how I’m going to dose for it sometimes. This may be somewhat influenced by the fact that I’m running a lot and trying to eat a slightly higher level of protein than I would naturally be picking out in my diet. So having to pay attention to everything to count it for dosing and overall trying to achieve a general higher baseline of protein sometimes gets annoying (although obviously the increased need for protein is a choice, whereas EPI and dosing in general is not!).

In general, I’ve not found it hard to remember to take my enzymes. I’ve developed habits around figuring out my counts, converting that to what number and type of pills I’m taking, and I get those out to take with my first bite and/or throughout my meal, depending on the number. One thing that has helped with this is getting smaller pill cases (like these – they’re purple! They also come in white or multicolor) that I visually don’t hate and can put both the prescription and over the counter pills in. I have 2-3 of these filled and ready to go at any given time, which makes it easy to grab one when I head out for the day, or to have sitting in different spots on my kitchen island/counter so I have the visual reminder in addition to my traditional “prescription” bottle.

The other aspect aside from decision fatigue is the stress of uncertainty around food. I took a trip recently and it was very stressful being out of my routine at home for the first time since we realized I had EPI. I had to take a lot of enzymes with me, take extras in case something happened to them, pack snacks, figure out food in advance but also be ready to figure out food on the fly. This included guessing what was in airplane (gluten free) food. On the first flight, I gave Scott my dry airplane chicken because it didn’t look good or even worth the PERT, and ate snacks from my bag instead. On the flight home, the chicken had a sauce (woohoo) and came with cheesy potatoes, so I rounded up my dose guess and things were fine. In between on the trip, I also erred on the side of caution and rounded up my doses.That meant I took a little more than usual, but I had already factored that into the amount of enzymes I had packed for the trip. So that went fine. But the uncertainty in what I’d be eating for several days was stressful and hard. To help work around that, I had picked a hotel near a gluten free bakery and near a gluten free restaurant that I knew from a previous trip, so that at least I could reduce the uncertainty of “is there anything celiac-safe (gluten free) that I can eat” (which used to be my sole concern when traveling) and limit myself only to the uncertainty of “what do I dose for this?” every time I ate. That helped. So I’ll probably continue to use the pre-planning skills I learned from living with celiac because the uncertainty at every meal for EPI is a lot, especially when jet-lagged, and so everything I can do to pre-estimate or pre-plan and make sure I have access to food pays off.

(As I mentioned at the start of this post, you can find my previous posts about EPI at DIYPS.org/EPI. And I’m working on a number of research initiatives related to EPI and improving methods for helping people titrate doses of PERT. If you’re interested in collaborating on research related to EPI, please reach out any time!)