This blog post is not for you. (Well that sounds mean, doesn’t it? It’s not meant to be mean. But this post is written for a very small subset of people like me who are stumbling around on page 16 of Google trying to find someone sharing experiences and specific details around methods (both successful and less so) for fueling for longer endurance events such as full marathons or ultramarathons with type 1 diabetes. So – please don’t be offended, but also don’t be surprised if you don’t find this post very useful!)

I’ve started running again, and more, this year, and am now to the point where I’m considering running another full marathon sometime next year. As I adventure into running longer distances, and more miles, I’m reflecting on what I did in my first full marathon that worked related to diabetes, and what I want to try to do differently. This post is logging some of my experiences and notes to date, in honor of fellow page-16-of-Google-seekers, rather than waiting til after I run another full (if I do) and there continuing to be not much info out there.

Some background on my running:

I’m not a runner. And not a good runner. I never liked running. But, I walked the Seattle half marathon in December 2012 and thought it might be fun to then walk the full marathon in December 2013. However, I also tried snowboarding for the first time in January 2013 and majorly damaged my knee. I could barely walk the few blocks to work every day, let alone do my normal activities. It took several months, and several PT sessions, to get back to normal. But part of my frustration and pain manifested into the idea that I should recover enough to still walk that full marathon in December. And in order to be off the course by the time it closed, I would need to run a little bit. And I could barely walk, and never ran, so I would need to do some training to be able to run a mile or two out of the 26.2 I planned to otherwise walk. So I set off to teach myself how to run with the idea of walk/running the full, which evolved into a plan to run/walk it, and mostly eventually run it. And that’s what I did.

Now – this marathon was December 2013. This was right when we created DIYPS, and a year before we closed the loop, so I was in full, old-school traditional manual diabetes mode. And it sucked quite a bit. But now, almost 5 years later, with the benefit of everything I’ve learned from DIYPS and OpenAPS about insulin and food timing etc., here’s what I realized was happening – and why – in some of my training runs.

What I worried about was going low during the runs. So, I generally would set a low temporary basal rate to reduce insulin during the run, and try to run before dinner instead of after (to reduce the likelihood of running with a lot of active insulin in my body). I would also eat some kind of snack – I think for energy as well as making sure I didn’t go low. I would also carry a bottle of Gatorade to drink along the way.

With the benefit of 5 years of lots of learning/thinking about all the mechanics of diabetes, here’s what was happening: 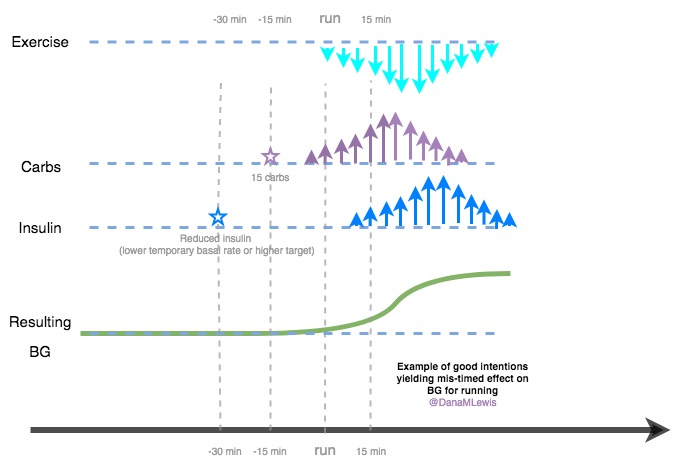 Per the visualization, the carbs would hit in about 15 minutes. If I reduced insulin at the time of the run, it would drive my blood sugar up as well, over a longer time frame (after around 45+ minutes as the lack of insulin really started to kick in and previous basal impact tailed off). The combination of these usually meant that I would rise toward the middle or end of my short and medium runs, and end up high. In longer runs, I would go higher, then low – and sip gatorade, and have some roller coaster after that.

Now, this was frustrating in training runs, but I did ok for my long runs and my marathon had pretty decent BGs with no lows. However, knowing everything I know now, and commencing a new burst of running, I want to try to do better.

My original interest in running was to set a mileage goal for the year, because I didn’t run very much last year (around 50 miles, mostly throughout summer), and I wanted to try to run more regularly throughout the year to get a more regular dose of physical activity. (I am very prone to looking at Seattle weather in October-December and January-March and wanting to stay inside!) That mileage goal was ambitious for me since I didn’t plan to race/train for any distance. To help me stick to it, I divided it by 12 to give myself monthly sub-goals that I would try to hit as a way to stay on top of making regular progress to the goal.

(Ps – pro tip – it doesn’t matter how small or big your goal is. If you track % progress toward whatever your mileage goal is, it’s really nice! And it allows you to compete/compare progress, even if your friends have a much bigger mileage goal than you. That way everyone can celebrate progress, and you don’t have to tell people exactly what your mileage goal might be. What’s tiny for you is big for others; and what’s big for you may be small to others – and that doesn’t matter at all!) 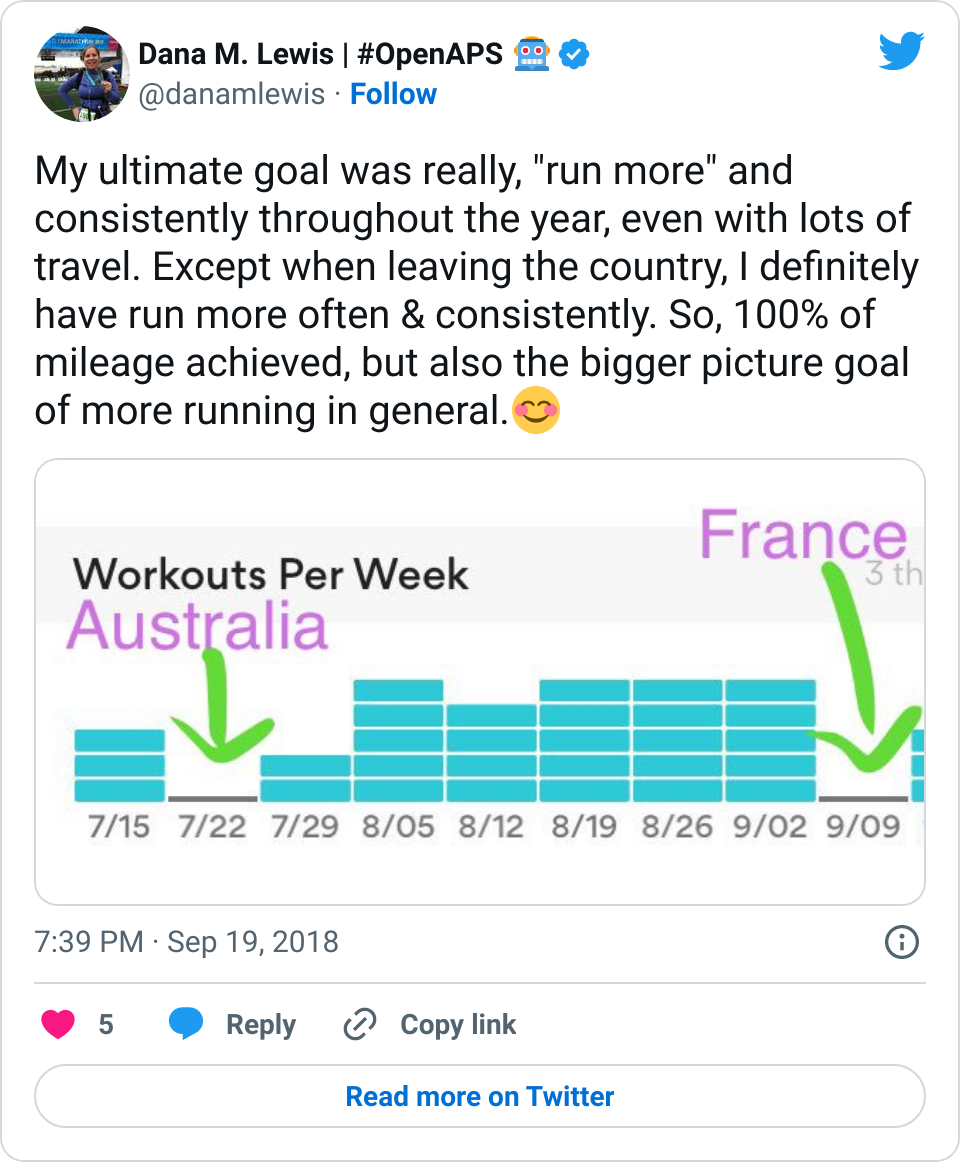 This has worked really well. The first few months I scraped by in keeping up with my monthly goal. Except for February, when I had three weeks of flu and bronchitis, so I surged in March to finish February’s miles and March’s miles. I then settled back into a regular amount, meeting my monthly goals…and then surged again in August, so I was able to finish my yearly mileage in the middle of September! Wahoo! I didn’t plan to stop there, though, so I planned to keep running, and that’s where the idea of running the Seattle half (always the Sunday after Thanksgiving) popped up again, and maybe a full next year. I started adding some longer runs (two 7.5 miles; a 9.35 miler, and now a 13 miler) over the past month, and have felt really good about those, which has enabled me to start thinking more carefully about what I did last time BG-wise and why this time is so much easier.

Earlier in the year, even on my short runs (one mile or so), I quickly realized that because of the shorter peak of Fiasp, I was less likely to have previous insulin activity drive me low during the run. Within the first handful of runs, I stopped eating a snack or some carbs before the run. I also stopped setting a super high target an hour before my run. I gradually moved into just avoiding >1.5u of insulin on board before short runs; and for longer runs, setting a target of ~110 about 30 minutes before I walked out the door, mostly to avoid any of that insulin activity dosed that would kick in right after I started running. (Keep in mind when I talk about setting targets: I’m using OpenAPS, my DIY closed loop system that does automatic insulin dosing; and for fellow DIY closed loop users, I’m also using exercise mode settings so I can set lower targets like 110 and the targets also automatically adjust my sensitivity and recalculate IOB accordingly. So without those settings, I’d probably set the target to 130 or so.)

And this has worked quite well for me.

Is it perfect? No, I do still go low sometimes..but probably <10% of my runs instead of 50% of them, which is a huge improvement. Additionally, because of having OpenAPS running to pick up the rebound, there’s not usually much of a rebound and resulting roller coaster like I would have in 2013. Additionally, because autosensitivity is running, it picks up within a few hours of any additional sensitivity to insulin, and I don’t have any overnight lows after running. Yay!

However, that all assumes I’m running at a normal-for-my-body or slower speed.

There’s a nice (annoying) phenomenon that if you sprint/run faster than your body can really handle, your liver is going to dump and your BG will spike as a result:

I didn’t ever notice this in 2013, but I’ve now run enough and at varying paces to really understand what my fitness level is, and see very obvious spikes due to surges like this when I’m sprinting too fast. Some days, if I run too fast (even for a mile), I’ll have a surge up to 180 or 200 mg/dL, and that’ll be higher than my BG is for the rest of that 24 hour period. Which is annoying. Funny, but annoying. Not a big deal, because after my run OpenAPS can take care of bringing my down safely.

But other than the running-too-fast-spikes, my BGs have been incredible during and following my runs. As I thought about contributing factors to what’s working well, this is what’s likely been contributing:

As I thought more about how much I’ve been running first thing in the morning/day, and usually not eating breakfast, that made me start reading about fasted long runs, or glycogen depleted runs, or low carb runs. People call them all these things, and I’m putting them in the post for my fellow page-16-of-Google-seekers. I call it “don’t eat breakfast before you run” long runs.

Now, some caveats before I go further into detail about what’s been working for me:

I’m not sure yet (again, not in a full marathon cycle training), but I actually think based on my runs to date that I will do ok (or better) if I start without breakfast, and take applesauce/gatorade every once in a while as I feel I need it for energy, and otherwise managing my BG line. If I start a downtick, I’d sip some carbs. If I started dropping majorly, I’d definitely eat more. But so far, managing BG rather than trying to prescriptively plan carbs (for breakfast, or the concept of 30-60 per hour), works a lot better for me.

Part of the no-breakfast-works-better-for-me might be because the longevity of insulin in your body is actually like 6 hours (or more). Most non-T1D runners talk about a meal 3 hours before the start of your race. And they’re right that the peak and the bulk of insulin would be gone by then, but you’d still have a fair bit of residual insulin active for the first several hours of your race, and the body’s increased sensitivity to that insulin during exercise is likely what contributes to a lot of low BGs in us T1 runners. There’s also a lot of talk about how fasting during training runs teaches your body to better burn fat; and how running your race (such as a marathon) where you do carb during the race (whether that’s to manage BGs or more proactively) will make your body feel better since it has more fuel than you’re used to. That’s probably true; but given the lower insulin action during a run (because you’ve been fasted, and you may be on a lower temp basal rate to start), you’re likely to have a larger spike from a smaller amount of carbs, so the carb-ing you do before or during these long runs or a marathon race may need to be lower than what a non-T1D might do.

tl;dr – running is going better for me and BG management has been easier; I’m going to keep experimenting with some fasted runs as I build up to longer mileage; and YDMV. Hope some of this was helpful, and if you’ve done no-breakfast-long-runs-or-races, I’d love to hear how it worked for you and what during-race fueling strategy you chose as a result!