When I was in elementary school, I did Science Olympiad. (Are you surprised? Once a geek, always a geek…) One of my favorite “events” was “Write It Do It”, where one person would get a sculpture/something constructed (could be Legos, could be other stuff) and you had to write down instructions for telling someone else how to build it. Your partner got your list of instructions, the equipment, and was tasked with re-building the structure.

Building open source code and tools is very similar, now that I look back on the experiences of having built #DIYPS and then working on #OpenAPS. First step? Build the structure. Second step? Figure out how to tell someone ELSE how to do it. (That’s what the documentation is). But then when someone takes the list of parts and your instructions off elsewhere, depending on how they interpreted the instructions…it can end up looking a little bit different. Sometimes that’s ok, if it still works. But sometimes they skip a step, or you forget to write down something that looks obvious to you (but leaves them wondering how one part got left out) – and it doesn’t work.

Unlike in Science Olympiad, where you were “scored” on the creation and that was that, in DIY diabetes this is where you next turn to asking questions and troubleshooting about what to change/fix/do next.

If you’re the person building a rig:

If you’re the troubleshooter:

As someone who spends a lot of time in the troubleshooter role these days, trying to answer questions or assist people in getting past where they’re stuck, here are my tips to help you if you’re building something DIY and are stuck. 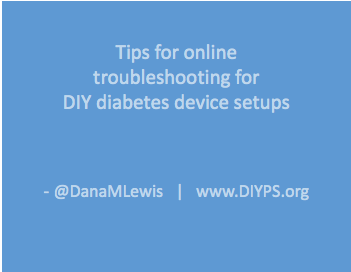 SOME THINGS TO TRY TO AVOID:

These are the tips that come to mind as I think about how to help people seek help more successfully online in DIY diabetes projects. What tips would you add?

2 thoughts on “Write It Do It: Tips for Troubleshooting DIY Diabetes Devices (#OpenAPS or otherwise)”