tl;dr: Put your #OpenAPS or other artificial pancreas rigs through the x-ray machine; it’s a small computer and a battery. 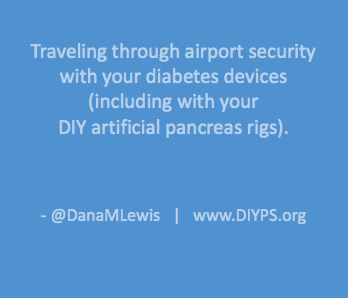 I travel quite a bit these days, so it’s pretty routine for me to pack up my diabetes gear and backup supplies and whisk away to the airport and the next adventure. In fact, in 2016 I think I went through airport security 44+ times, in several countries. I have never had any issues with my #OpenAPS (DIY hybrid closed loop artificial pancreas) rigs – even when I carry multiples. Here are some tips on what gear should be put where, who should be told what during the security process, and how to further simplify (as much as is possible with diabetes!) the airport security experience when traveling with diabetes.

6 little pancreases went to the airport & had no problems in security, as usual. #OpenAPS #emergencybackuppancreases pic.twitter.com/eFfYru2Ivt

A list of diabetes gear you’re probably packing for your trip:

Out of that list? Here are the only things I would pull out of your bag.

*If you have a single bottle of insulin, it’s under the liquid (3oz) limits, so you don’t technically need to pull it out. But if you are carrying numerous bottles/pens/etc., if you have them separately bagged and can pull out separately, I would do so in order to reduce the risk of them flagging your bag for needing additional screening.

** Yes, you have a medical need for liquid and can take juice through security. HOWEVER, I *highly* recommend having this in a baggie and pulled out of your bag so it is separate. They’ll often pick that up, examine it, and if you say “medical liquid for diabetes”, it’s fine. Sometimes you’ll get pulled for a pat down, but not always. And, this usually prevents them from having to dig through your bags to find the juice and go through all your things. (Which is annoying, not to mention time consuming).

My second “HOWEVER” related to juice: I’ve stopped carrying juice for lows when I air travel. Yes, it only takes an extra couple of minutes or whatever for them to check things out, but I’d rather not have any hassle if I can avoid it. I instead have switched to Starbursts, Skittles, and similar. (They’re super fast acting for me, and actually make it easier to do a small 4g correction vs having to bust open an entire 15g juice box that can’t really be saved for later.) I have those in my pocket or easily accessible in an outer pocket of the bag that will go under my seat on the plane. You can of course still carry juice, but think about if that’s really worth the hassle/effort and if there’s an alternative (glucose tabs, small wrapped candies, etc.) that might be easier for treating lows when traveling. YDMV, of course.

(My favorite carrying-juice-through-security story is this: I was traveling to somewhere in Europe while in college (well before my DIY closed loop days), and I had a large baggie jam-packed with 8 or 9 juice boxes and a bottle of insulin. Despite telling them that I had diabetes and was traveling internationally and this was medically necessary in case of low BGs, the TSA agent said “how many juice boxes could you possibly need in an 11 hour flight? You wouldn’t use more than one, right?” It was *really* hard not to laugh.)

What about insulin pumps? Do you take it off?

What about a doctor’s note?

I have never carried a doctor’s note, and have not had an issue in the 14+ years I’ve been flying with diabetes – including in dozen of international airports. YDMV, and if you’d feel more comfortable with one, you can get one from your doctor. But for what it’s worth, I don’t travel with one.

What about international airports?

The only thing to know about international airports is they have similar guidelines about liquids, so plan to also pull out your juice and toiletries from your bag. Same rules apply for keeping rigs, supplies, etc. in your bag otherwise. I’ve never had an issue based on pancreas rigs internationally, either. They’re small computers and batteries, so both TSA and international security are used to seeing those in the x-ray.

Person in front of me at security: "I have two laptops, is that ok?"
Me behind him, with two laptops, a Raspberry Pi, and two Edisons: "yes"

(Let me know what other travel-related questions you have, and I’ll keep adding to this post if it’s helpful. Happy traveling!)