After three years of using a multi-purpose activity backpack as my running pack, the strap connector broke, and I had to find and re-stock a new running pack. I use a running pack for when I’m doing long runs for marathon or ultramarathon training.  I ended up pulling everything out of my old backpack and evaluating whether I still wanted to carry it on every long run. For the most part, everything got moved over to the new pack. There were a few cases where I had excessive duplicates (more on that below and why) where I ended up reducing the quantity. But everything else made the list for what I carry with me on long runs every single time.

Phew. That’s a lot of stuff. And yes, it does end up being more supplies and more weight than most people carry. But…I use pretty much everything in my pack every few runs. Stuff happens: pump sites fall out, blisters happen, chafing happens, GI stuff happens..and I’ve found that training and running with a little extra weight in my pack is worth having the proper supplies when I need them, rather than having to end runs early due to lack of preparation or minor supplies that would enable me to keep running.

Every time I go out for a run, I add the requisite amount of snacks, enzymes, electrolyte pills, and hydration for the run. Any time I come back from a run and I have depleted a supply off of the above list – such as using my backup pump site – I immediately go and refill that supply so I don’t have to remember to refill it prior to the next run. Keeping the above supplies topped off and ready to go always in my backpack means they’re always there when I need them, and the peace of mind of knowing how I can handle and that I can handle these situations while running is priceless.

Note: previously I was using a backpack, because it was $30 and for my running it was good enough. However, when the strap broke, I looked to buy the same backpack again and it was $60. It was fine for $30 but if I was going to double the cost, I decided to research alternative running packs and vests. Vests seem to be more common in ultrarunners, so I looked for those, although they’re a lot more expensive (often $125-200). I was disappointed with how small of a volume some of them held, or they were just ugly. I liked the look of a purple one I found that came with a 1.5L bladder….but ugh. I fit a 3L bladder in my previous backpack and typically fill it 2-2.5L full as a baseline, and all the way up for a longer (6h+) unsupported run. I decided to risk getting this vest even though it was smaller and try putting my larger 3L capacity bladder in the new vest. (Luckily it was on sale for $90 at the time  which made it a little less annoying to buy compared to a $150 one.) The bladder does fit, but it sticks out the top and hits the back of my neck if it’s all the way full (3L). So for the most part, I’m filling the 3L capacity bladder about 2L full (and as noted in this post earlier, putting it inside an insulated envelope to help retain the cold for longer), and that works for me.

One thing I do like a lot from my new running vest is the front pockets. My old backpack I had to partially take off and twist around me in order to get snacks out. With two large front pockets, I can fit several hours of fuel in there so there is no twisting involved to get my fuel out, which is helping with my goal to fuel every 30 minutes. I do wish there was a separate smaller pouch – my old backpack had a small old school flip phone size “cell phone” pocket that I used to keep my baggies of enzymes and electrolytes in. Right now, I just have those baggies floating around the top of those pockets and it’s fairly easily to grab and pull out the right baggie, but I’m toying with adding some kind of small strap-on holster/pouch to the shoulder just for enzymes so I don’t have to worry as much about them jostling out when my pockets are completely full of snacks. But otherwise, these front pockets are overall a nice improvement. 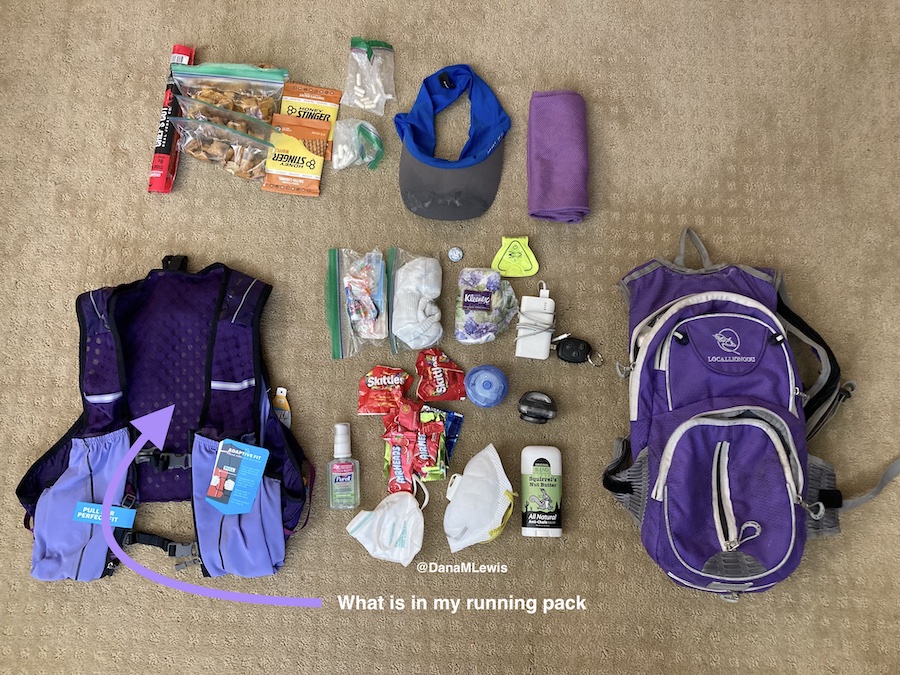