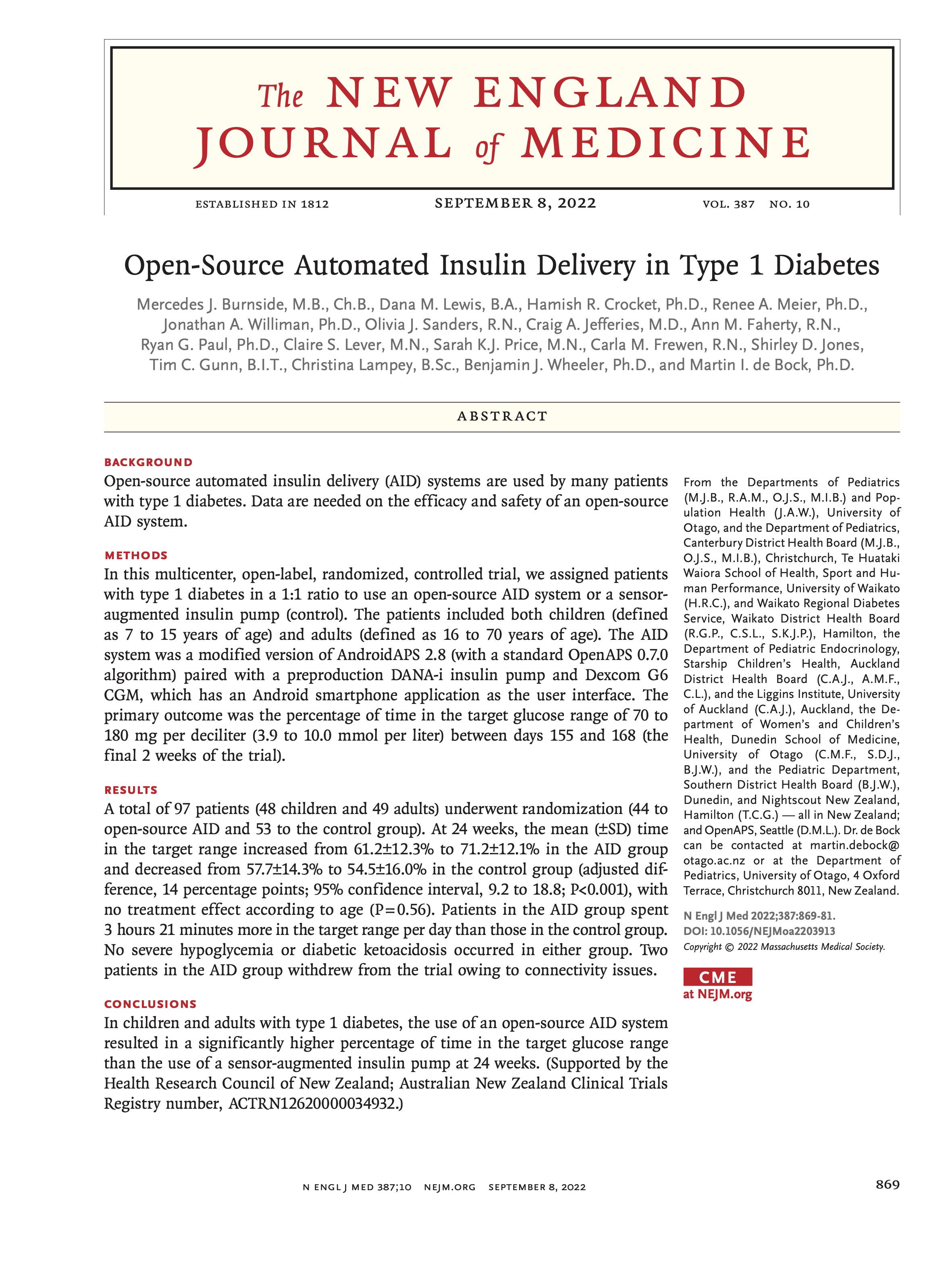 I’m thrilled to share that the results of the first RCT on open source automated insulin delivery (AID) is now published in a peer-reviewed medical journal (New England Journal of Medicine, known as NEJM). You can find it at NEJM here, or view an author copy here. You can also see a Twitter post here, if you are interested in sharing the study with your networks.

I wanted to highlight a key few takeaway messages from the study:

I’d also like to highlight some meta aspects of this trial and the significance of these results being published in NEJM.

The algorithm (open source, from OpenAPS) used in the trial, as well as the open source app (AndroidAPS) used to automate insulin delivery, were built by people with diabetes and their loved ones. The algorithm/initial AID work was made open source so other people with diabetes could use it if they chose to, but also so that researchers and clinicians could research it, learn from it, use it, etc. Speaking on behalf of Scott (Leibrand) who worked with me endlessly to iterate upon the algorithm and then also Ben West whose work was critical in communicating with insulin pumps and putting the pieces together into the first open source “closed loop” automated insulin delivery system: we all wanted this to be open source for many reasons. You’ll see some of those reasons listed at the bottom of the plain language OpenAPS “reference design” we shared with the world in February 2015. And it is exceptionally thrilling to see it go from n=1 (me, as the first user) to thousands worldwide using it and other open source AID systems over the years, and be studied further in the “gold standard” setting of an RCT to validate the real-world outcomes that people with diabetes have experienced with open source AID.

But these results are not new to those of us using these systems. These results every day are WHY we use and continue to choose each day to use these systems. This study highlights just a fraction of the benefits people with diabetes experience with AID. Over the years, I’ve heard any of the following reasons why people have chosen to use open source AID:

All of this would not be possible without hundreds of volunteer contributors and developers who iterated upon the algorithm; adapted the concept into different formats (e.g. Milos Kozak’s work to develop AndroidAPS using the OpenAPS algorithm); wrote documentation; troubleshot and tested with different pumps, CGMs, hardware, phones, software, timezones, etc; helped others interested in using these systems; etc. There are many unsung heroes among this community of people with diabetes (and you can hear more of their stories and other milestones in the open source diabetes community in a previous presentation I gave here).

From developers, to community contributors and community members, to the study team and staff who made this trial happen, to the participants in the trial, and to the peer reviewers and editor(s) who reviewed and recommended accepting the now-published article in the New England Journal of Medicine: