There’s been a lot of excitement (yay!) about the results of the CREATE trial being published in NEJM, followed by the presentation of the continuation results at EASD. This has generated a lot of blog posts, news articles, and discussion about what was studied and what the implications are.

One area that I’ve noticed is frequently misunderstood is how “open source” and “DIY” are different.

Open source means that the source code is openly available to view. There are different licenses with open source; most allow you to also take and reuse and modify the code however you like. Some “copy-left” licenses commercial entities to open-source any software they build using such code. Most companies can and do use open source code, too, although in healthcare most algorithms and other code related to FDA-regulated activity is proprietary. Most open source licenses allow free individual use.

For example, OpenAPS is open source. You can find the core code of the algorithm here, hosted on Github, and read every line of code. You can take it, copy it, use it as-is or modify it however you like, because the MIT license we put on the code says you can!

As an individual, you can choose to use the open source code to “DIY” (do-it-yourself) an automated insulin delivery system. You’re DIY-ing, meaning you’re building it yourself rather than buying it or a service from a company.

In other words, you can DIY with open source. But open source and DIY are not the same thing!

Open source can and is usually is used commercially in most industries. In healthcare and in diabetes specifically, there are only a few examples of this. For OpenAPS, as you can read in our plain language reference design, we wanted companies to use our code as well as individuals (who would DIY with it). There’s at least one commercial company now using ideas from the OpenAPS codebase and our safety design as a safety layer against their ML algorithm, to make sure that the insulin dosing decisions are checked against our safety design. How cool!

However, they’re a company, and they have wrapped up their combination of proprietary software and the open source software they have implemented, gotten a CE mark (European equivalent of FDA approval), and commercialized and sold their AID product to people with diabetes in Europe. So, those customers/users/people with diabetes are benefitting from open source, although they are not DIY-ing their AID.

Outside of healthcare, open source is used far more pervasively. Have you ever used Zoom? Zoom uses open source; you then use Zoom, although not in a DIY way. Same with Firefox, the browser. Ever heard of Adobe? They use open source. Facebook. Google. IBM. Intel. LinkedIn. Microsoft. Netflix. Oracle. Samsung. Twitter. Nearly every product or service you use is built with, depends on, or contains open source components. Often times open source is more commonly used by companies to then provide products to users – but not always.

So, to more easily understand how to talk about open source vs DIY: 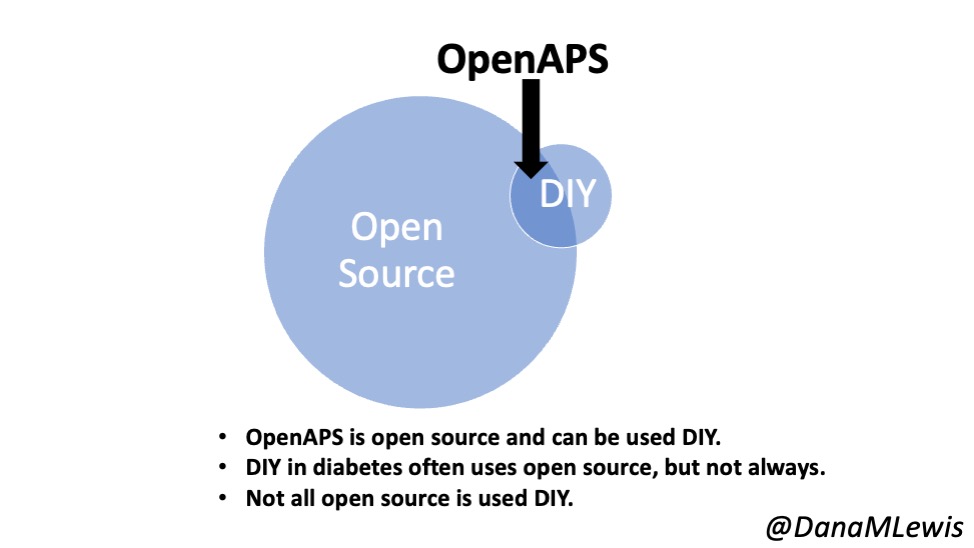