I’ve written in the past about running with type 1 diabetes. I’ve tried running fasted, which works well in one sense because I have no extra insulin on board. I’ve modified my strategy further to run 2 or more hours after breakfast, so I have fuel but don’t have (much) IOB. But as I’ve extended my forays deeper into longer distance ultrarunning, and as I learned I have exocrine pancreatic insufficiency (EPI), running is getting a little more complicated.

For past thoughts on T1D running, here’s my post on running fasted and thinking about IOB. I also wrote more here last year about marathon and 50k ultramarathon training and how I use small doses of carbs to “correct” for dipping blood sugars. Last year, my body didn’t seem to need or want much additional fuel, so I didn’t force it. Part of that was likely a symptom of my undiscovered EPI. Now, however, that I am taking enzymes for pancreatic enzyme replacement therapy so I can digest what I eat, I have more energy (because my body is actually using what I eat), but I also get hungry and seem to need more fuel while running. But everything I eat needs enzymes to help me digest it, even things that I eat while ultrarunning.

So…it’s complicated to run with type 1 diabetes and micromanage insulin and carbs to manage blood glucose levels; and I’m limited in my fuel choices because I have celiac disease; and now I have to also carry, titrate, and dose enzymes for any fuel that I eat on the run as well.

Oh, and like insulin, the timing of enzymes matters. But there are no studies on enzyme digestion and how that changes during exercise, let along endurance activities like ultrarunning. So I am running in the dark, so to speak, trying to figure out things myself as I go along.

Here is more detail about what I’m doing and why I’m constantly running multivariable equations in my head while training for a 50k, 50 mile, and maybe even 100 mile run later this year:

I wear a CGM, so I can see how my blood sugar (BG) is changing during the run. I have a pump, so I can make any changes to insulin dosing. I also have an open source AID system (OpenAPS), so before running I set a higher target which tells the system not to give me as much insulin as it would otherwise. (It also does an awesome job with post-run insulin sensitivity changes! But that’s another post.) As I’ve previously written about, reducing insulin on board (IOB) when I know I’ll be running is the important first step, so I don’t have to start taking carbs and treating a low at the start of my run. Usually, my open source AID and I (by giving it a temporary target) do a good job getting me to my run start without much IOB, and ideally somewhere around 120-130 mg/dL.

From that level area, I can see rises and dips in BGs and dose accordingly. I carry easily dissolving small mint-like candies that are a few carbs (3-4g), or Airhead minis (8g of carbs), and with any dip below 120 or recurring drop that’s not coming up after 15 minutes since my last carb, I take more. These are pretty much straight sugar, and my body seems to do ok with absorbing carbs without enzymes, as long as there is no fat or protein involved.

However, with ultrarunning it’s generally considered to be ideal to proactively be consuming fuel to balance out the energy that you’re burning. Again, this is where I’m less experienced because for the last years, my body never wanted fuel and I did ok. However, now I seem to need fuel, so I’m working on figuring this out because food typically has some fat and protein, and I have to dose enzymes for it.

I carry a baggy with some single-enzyme (lipase) pills and some multi-enzyme (lipase for fat, amylase for carbs, and protease for protein) pills. I carry carefully measured single-serving snacks that I know the fat and protein quantity of. For each snack, I might need 1-2 enzyme pills of various sorts.

Timing matters: I can’t take enzymes and then snack slowly for 30 minutes. To eat slowly, I would need to take enzymes every 10-15 minutes to match the speed of eating so it will ultimately be there to help the food digest.

But, more carbs/food at once has an effect on how I feel while running and also to my BGs. I’ve tried to find things I love to eat running and can eat within 5 minutes – even while running 30 seconds and walking 60 seconds repeatedly – that are also less than 1-2 enzyme pills worth of fat and protein and aren’t too many carbs at once. These may be 15-20g carb snacks which means a bigger impact to my BG levels, and I may need to even do a small bolus (give insulin) for what I am eating. The challenge again is that food can hit BGs in about 15 minutes but it takes ~45 minutes for insulin activity to peak. And, during exercise, I’m more sensitive to insulin than I normally am. There’s no magical calculation to know how much “more” sensitive I am in the midst of a run, so I have to guess and thread the needle between not giving too much insulin that would cause a low BG but giving enough so I don’t spike above 180 mg/dL, which is what makes me feel icky while running.

Preferably, and very personally, I’d like to float up and down between 120-140 mg/dL or 130-150 mg/dL, which is higher than BGs usually hang out for me without exercise (remember: open source AID!), but is high enough that I have buffer against a low, so if I suddenly dip and I haven’t looked at my BGs in 15 minutes, I can usually still carb up and prevent an annoying low. (Lows matter even more on runs because they slow me down physically, which is usually not what I’m going for.)

It doesn’t always work that way. Sometimes I undershoot the insulin because I’ve miscalculated my effort running, and my BG drifts high and I have to decide whether or not to correct further. Other times, I overshoot (or have increased my run effort and didn’t take that into consideration) and cause BG to dip or dive toward low. Then I have to carb up but hopefully not so much that I cause a high.

My priority list therefore is: manage BGs, take in fuel, try not to over or undershoot on insulin for the fuel or overshoot carb corrections for drifting BGs, plus remember to take enzymes for the fuel and dose the right amount, plus stay on top of my electrolytes. Oh, and keep run-walking.

And along the way, I am also trying to document and learn whether the absorption of enzymes changes during different intensities or lengths of exercise; whether these over the counter enzymes are reliably measured enough for small snacks, and whether my personal ratios for fat and protein are any different during exercise the way my sensitivity to insulin changes during exercise.

It’s a lot of work. Plus, the pre-work that goes in to finding, measuring, and preparing foods that I think I want to eat during the run!

My current short list of single-serving snacks that I can tolerate while doing long runs includes: 8 gluten free peanut butter pretzel nuggets; 1 serving of chili cheese Fritos; 6 gluten free yogurt covered pretzels; and 1 gluten free stroopwaffle. Each of those is 15-20g of carb, 1-2 enzyme pills, and some of them have a bit of sodium. (I’m also fairly sensitive to sodium so I take electrolyte pills every 30-45 minutes while racing, but I’ve realized the extra fueling with a bit of sodium makes it so I don’t have to take the electrolyte pills every 30 minutes like I used to.)

When I build up to my longer (50 mile or maybe 100 mile ultras, if I get there!) runs, I’m also going to need additional “real food” options, as I doubt I will be able to or want to eat stroopwaffle and Fritos for as long as the run will take. This is just a theoretical list, but it includes tomato soup (sodium and warm liquid!), instant mashed potatoes (soft and not much chewing involved), grits and oatmeal (not together, but same reason as mashed potatoes). These all luckily also happen to be lower in fat and protein, which means easier to digest (in theory), and I am less likely to have better error margins against getting the enzyme dosing wrong given the small amounts of fat and protein.

What it comes down to is that running with type 1 diabetes is a giant constant personal science experiment. Celiac makes it more work, but also removes some of the variables by limiting what I can to eat: as at races I can’t eat out of any open bowl or package due to cross contamination concerns, and reading packages takes time, so it’s way safer to just eat what I bring myself. Having EPI on top of that means mastering the art of digesting food with pancreatic enzyme replacement therapy, which is its own special form of science experiment.

There’s a lot of variables, a lot of science, and a lot of learning going on every time I go for a run. Doesn’t it sound fun?!

—
(PS – If you’re someone with EPI who has some experience with endurance activity and changes to dosing enzymes..or find that it doesn’t change anything…please reach out! I’d love to chat and take my knowledge base from n=1 to n=2!) 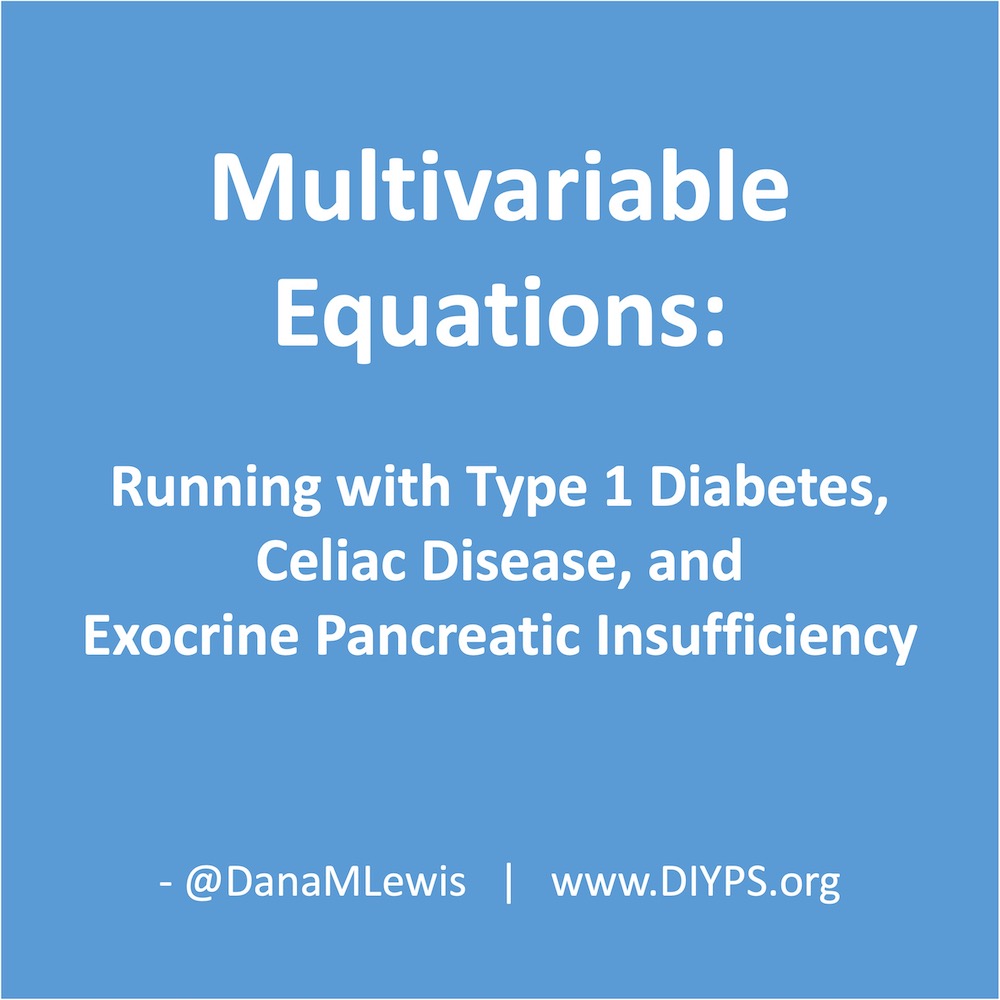