After the flu, I continued to be sick. We did the usual song and dance many people do around “hey, do you have pneumonia?”. Which, luckily, I didn’t, but I was still pretty sick and my after visit summary sheet said bronchitis. Also, my average BGs were going up, which was weird. After all, when I had the flu, I had spectacular BGs throughout. So I was pretty concerned when my time in range started dropping and my average BG started rising.

In diabetes, there are a lot of things that influence BGs. It can be a bad pump site; a bad bottle of insulin; stress; sickness; etc etc. that causes out of range BGs. Most of these are helped by having a DIY closed loop like OpenAPS. So, when your BGs start to rise above (your) normal and stay there, it’s indicative of something else going on. And because I was sick, that’s what I thought it was. But as I continued to gradually heal, I noticed something else: not only were my BG averages continuing to rise (not normal), but I also was needing a lot more insulin. Like, 20-30u more per day than usual. And that wasn’t just one day, it was 4 days of that much insulin being required. Yikes. That’s not normal, either.

So, I was thinking that I was hitting the Fiasp plateau, which made me really sad. I’ve been using Fiasp for many months now with good results. (For those of you who haven’t been tuned into the diabetes community online, while many people like Fiasp because it’s slightly faster, many people also have experienced issues with it, ranging from pump sites dying much faster than on other insulins; having issues with prolonged high BGs where “insulin acts like water”, etc.) But, I was prepared mentally to accept the plateau as the likely cause. I debated with Scott whether I should switch back to my other insulin for 2-3 sites and reservoirs to give my body a break, and try again. But I was still sick – so maybe I should wait until I was not clearing gunk out of my lungs. Or I was also pretty convinced that it was correlated with my absolute ZERO level of activity. (I had some rising BG averages briefly over Christmas where I was fearing the plateau, but turns out it was related to my inactivity, and getting more than zero steps a day resolved that.) I knew I would be moving around more the next week as I gradually felt better, so it should hopefully self-resolve. But making changes in diabetes sometimes feels like chicken and egg, with really complicated chickens and eggs – there’s a lot of variables and it’s hard to pin down a single variable that’s causing the root of the problem.

One other topic came up in our discussion – vitamin D. Scott asked me, “when was the last time you saw the sun?”. Which, because I’d been sick for weeks, and traveled for a week before that, AND because we live in Seattle and it’s winter, meant I couldn’t remember the last time I had seen the sun directly on my skin. (That sounds depressing, doesn’t it? Sheesh.)

So, I decided I would not switch back to the previous insulin I was using, and I would give it some time before I tried that, and I would focus on taking my vitamin D (because I hadn’t been taking it) and also trying to get at least SOME activity every day. I took vitamin D that night, went to bed, and….

…woke up with perfect BGs. But I didn’t hold my breath, because I was having ok nights but rough days that required the extra 30 units of insulin. But by the end of the day, I still had picture-perfect BGs (my “normal”), and I was back to using my typical average amount of insulin. PHEW. Day 2 also yielded great BG levels (for me, regardless of sickness) and around average level of insulin needed for the day time. Double phew. Day 3 is also going as expected BG and total insulin usage wise.

You might find yourself thinking, “how can it be as simple as Vitamin D? There’s probably something else going on.” I would think that – except for I have enough data to know that, when I’m vitamin D deficient, getting some vitamin D (either via pill or via natural form from sunlight) can pack a punch for insulin sensitivity. In 2014, Scott and I went out in February even when it was cold to sit in a park and get some sunshine. After about an hour of sitting and doing nothing, with no extra insulin on board, WHOOOSH. I went mega-low. I’ve had several other experiences where after being likely vitamin D deficient, and then spending an hour or so in sunlight, WHOOSH. And same for when there was no sunlight, but I took my vitamin D supplements after a while of not taking them. And no, they’re not mixed with cinnamon 😉 (That’s a diabetes joke, cinnamon does not cure diabetes. Nothing cures type 1 diabetes.)

So tl;dr – my insulin sensitivity is influenced by vitamin D, and I’ll be trying to do a better job to take my vitamin D regularly in the winters from now on! 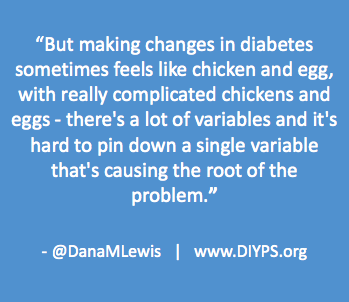