In the last few years, I’ve had the opportunity (or challenge) of re-thinking how I do holiday food traditions. For the last 13+ years I’ve figured out how to do everything gluten free (because I have celiac). I had that figured out pretty well. But more recently, when I was eliminating onion and garlic and trying low FODMAP last year, it was a lot harder. Instead of modifying what I usually did, I essentially started from a blank page in figuring out what I *could* eat and then what I wanted to eat.

Thankfully, this year I have many more options. Since I realized it was exocrine pancreatic insufficiency (EPI) that was causing my GI issues, I am back to being able to eat whatever (gluten free) that I want. It’s a lot easier. But it’s still different this year than years prior, because I need to generally estimate how many grams of fat and protein in what I am eating in order to determine how much pancreatic enzyme replacement therapy (PERT) that I need to take to “cover” the meal so I can digest it.

Usually at Thanksgiving, we do a family-style meal. (With a group of family that is COVID-boosted and everyone does a rapid test before they come.) We all help make food and set it out on a table, and people pass it around and serve themselves. In the past, I’ve had a few gluten free specific dishes that just sat in front of my plate, and I served from those and took other naturally GF options (like sweet potatoes, green beans, etc) as they were passed around.

This year, I wasn’t sure how I wanted to handle it. I’m still not great at guesstimating the amount of fat and protein in food the way I am with carb estimates (for which I have 20 years of practice!). I knew I would want to weigh some of the food to help estimate it (turkey, stuffing, etc that are likely to be higher fat and/or protein quantities) whereas others like sweet potatoes were something I generally have estimated well.

But would I bring my scale to the table and pick up my plate and weigh it with each portion I served? That seemed like it might draw attention to me and generally reduce the joy of the meal for me. I could fill my plate then go back to the kitchen with it and weigh it; but that also felt like it would steal some of my joy from the experience of sitting down and eating with everybody.

Instead, I decided that I would dish up my plate in the kitchen, where I could weigh things and then pop them onto my plate, then take my plate out and have it ready to go (all estimated and pre-decided with how much PERT I needed to take) when everyone else was ready to eat.

That also inspired some flexibility in the choices of what I was eating, too. Instead of cooking a small, separate gluten free turkey (from which there were usually too many leftovers), I decided instead to go with a pre-made meal that is turkey, mashed potatoes, gravy, and a side of green beans. “Pre-made” may sound gross, but there’s a brand that does mail-order ready-made gluten free meals that are refrigerated and you only have to microwave them. And I happen to really like their turkey dinner one. So this year I decided to get several of those turkey meals, so that my turkey, mashed potatoes, and gravy were already pre-portioned and I can happily use the nutrition counts on the package. That’s the majority of what I was stressing about measuring/estimating! So that takes out a) a lot of work of making a separate GF turkey and b) makes it easier because I already have counts for the biggest portions of my plate.

I will still make a box of gluten free stuffing, but that’s essentially only one thing for which I’ll need to use the scale to estimate the serving size and nutrition counts. Otherwise, I’ll microwave my turkey meal, put it on my nice plate, add my portion of stuffing, and be able to take it to the table and eat just like everyone else.

I’ve also worked to take the guesswork and stress out of dessert, too.

I realized a few years ago that no one was eating any of the GF desserts I brought, even when I would specially hand-make gluten free pumpkins pies. In part because no one wanted to “take” my food (even if I offered it to them); but there’s also a bias that GF stuff is less good (which is sometimes true) and there’s a gluten-y option so why not just eat that? But I realized that I miss the joy of being able to pick from 2-3 dessert options just like everyone else. So instead of making or bringing one big GF pie and having a slice and having way too many leftovers, I’d just as soon get a frozen miniature gluten free pumpkin pie. And last year, I decided to get *two* miniature pies – for options! Then I could be like everyone else and decide on a whim whether I felt like pumpkin pie or a different flavor of pie. So that’s what I’m doing this year, too. I got 3 miniature pies – pumpkin, lemon, and apple. Yum!

The other thing this thought exercise has brought is the realization that if I’m making/preparing/bringing all my own food, I don’t have to limit myself to just eating it on Thanksgiving. This way I’ll get to have more moderate portions multiple times, without feeling inclined to overeat at the main Thanksgiving meal – because my meal can be repeated multiple times throughout the week, complete with a selection of tasty GF pie options.

I spent part of last week stressed about figuring out what to eat, what the nutrition counts are, etc. But I’ve tried to turn this into an upside, which I think it actually is (given my situation of also having celiac/GF to contend with alongside figuring out EPI).

This also reminded me how helpful I find it to separate the stressful decision making (what am I going to eat) and the math (what are the counts; how many enzymes does this mean I need?) from the act of making and consuming the food. All together, those can feel stressful and overwhelming (especially if I’m already stressed and overwhelmed about anything else). Separating those actions takes the time pressure off.

If you’re dealing with food allergies or food limitations or needing to dose medication (like enzymes) for your food, this is one way that I deal with reducing stress: planning ahead as much as possible and having as much done in advance as possible.

I also do this for diabetes when possible, such as when I’m planning for a trip or a holiday week with lots of busy activities. I take some time in advance and set out needed supplies for a pump site change; I also pre-fill two or three reservoirs with insulin, so instead of having to do a reservoir AND change my site, I’ve done half the work and reduced the friction. With the reservoir set up ready to go and the pump site sitting on my bathroom counter, it makes it feel easier to change my pump site (even though it’s not that much more work, it feels like I’ve made the amount of time and hassle it takes a lot more doable).

The final thing that I did to reduce stress was to ask for help. I told Scott (my husband) what I was stressing about. He asked how he could help, and mainly that was discussing my options and what I wanted to possibly eat and discussing the different options from bringing the scale to the table vs plating my food in the kitchen all the way to making different food (which I ultimately chose).

I also assigned him a task to help me do my nutrition estimates. One of the frozen GF individual-sized pies I bought is from an amazing GF bakery in Western Washington, but because they’re a small bakery their items don’t have nutrition counts. As he’s done in the past, I told him I want help a) weighing the pie and b) looking up GF apple pies to get a general ballpark nutrition estimate. We’d then use the weight of my actual pie to create an estimated count based off of similar GF apple pies with nutrition counts. It’s not perfect, but it’s better than my wild guessing.

And, having him help makes it feel more manageable overall, because I’m not doing it “all” by myself.

You don’t have to do it by yourself all the time. No, no one can swallow your enzyme pills for you, but the people in your life can help you look up nutrition information or find safe places for you to eat or find safe options that you can eat. Sometimes you need to ask for them to help, because people don’t always know that they can help. And be clear with them, whether you’re just venting and want a listening ear (valuable!) or whether you’re looking for brainstorming ideas and solutions for a particular thing – which can also be super helpful. But remember to ask. Don’t keep it all to yourself; you are loved and people want to help but they may not know how to help.

You’ll notice that the title of this blog post was about modifying things…but I didn’t modify my food choices at all in the sense of “reducing” my food as one might infer from traditional thinking about meal modifications. I’m not eating fewer grams of fat because I have exocrine pancreatic insufficiency. Medically, in general, it’s no longer recommended for people with EPI to consume lower fat diets than the general population. Instead, we dose enzymes to match the amount of fat (and protein and carbs) that we are eating. It’s similar to type 1 diabetes and insulin. Before insulin was discovered, people were on the starvation diet (to prolong dying); but once insulin was discovered we have been able to eat the same diet as other people, as long as we cover what we are eating with insulin. Individually, you may CHOOSE a different, specific diet approach that works for you; but medically, it’s not necessary to modify things in general based on EPI or type 1 diabetes. The biggest/primary modifications I make are to not eat gluten, because I have celiac disease. Otherwise, I estimate the carbs (to tell my open source automated insulin delivery system that I’m eating) and fat and protein (to calculate how many enzymes I should be taking for EPI) in what I’m eating and carry on, just like everyone else. 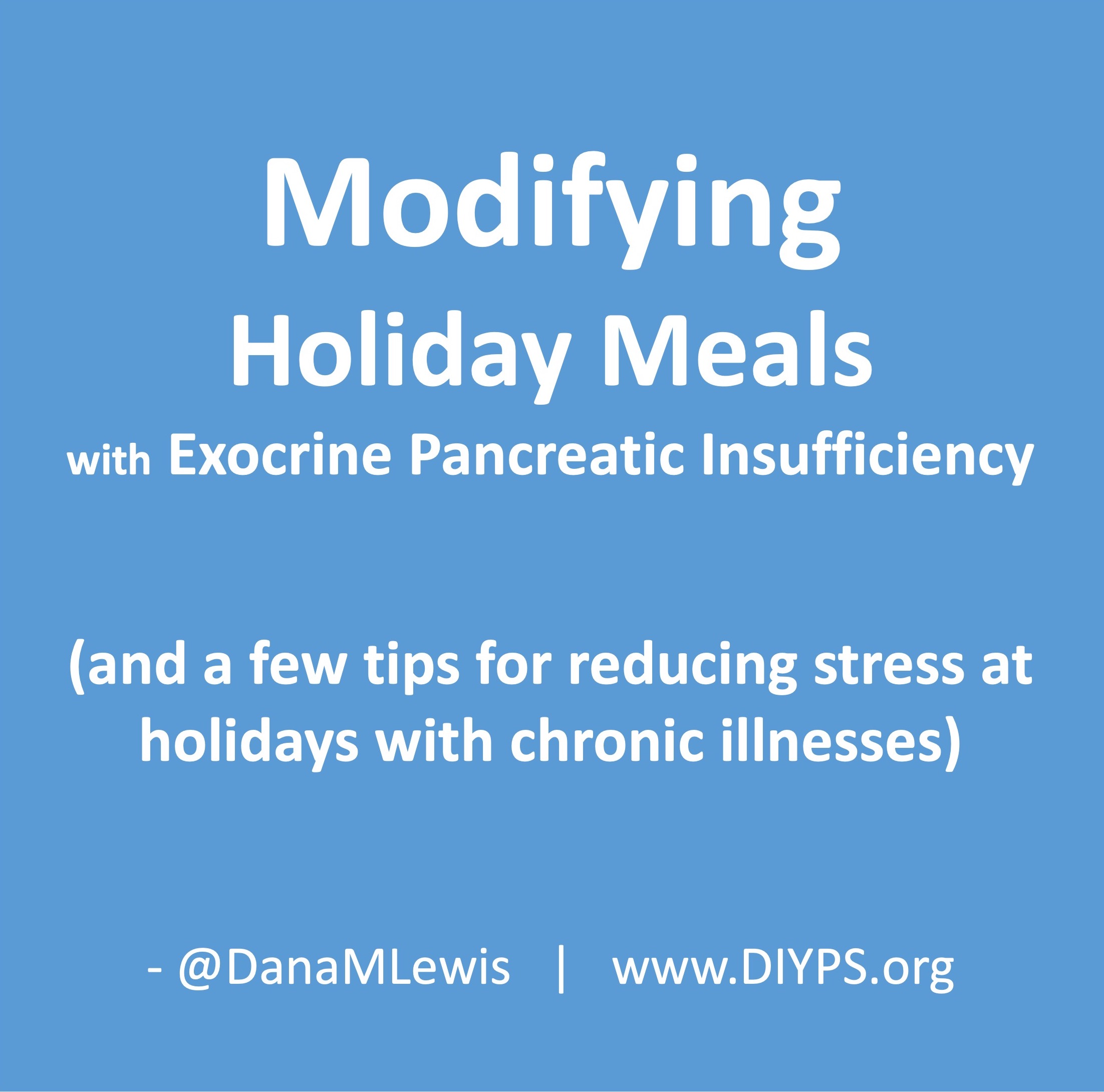