In 2014, a lightbulb went off. We could use Ben’s code to read and write to a particular version of an old pump. We had built an algorithm to take is input carb, BG, and insulin dosing data, and to output recommendations for action. If we hooked those together, we could close the loop. We could close the loop? Cool! We should try that. But wait – I didn’t have a compatible pump..

This is another place social media played a role in the story that is #OpenAPS. I posted on Facebook asking if anyone had one of these older model pumps sitting around unused, because we wanted to use it for research and try to close the loop. Would anyone dust off the dust bunnies on one and share? The answer turned out to be yes. A very kind person sent me the pump, we put it into play, and we closed the loop. I put the pump on, and the rest is history. Yay!

A year ago, I noticed a broken piece of blue plastic on the carpet of a hotel room. “Hey, that looks like my pump color…” “!!!! A piece of my pump broke off!”. Luckily, it was the upper edge of the reservoir; it did not impact usability of the pump; I taped it back on and continued to tape it over time. I thought eventually this, or other cracks or other physical broken pieces, would be what eventually would be the cause of failure of this beloved, well-used second-generation pump.

Some history for those who don’t know the backstory: we’re talking about using older generation pumps because it was discovered that someone (if in range, and with the right equipment) could remotely command the dosing of the pump. This was discovered by a security researcher, and the FDA had the manufacturer fix this in a future version. Thus, more modern pumps you couldn’t remotely set temp basals on, or remotely bolus. Turns out, that “hole” is what enabled us to close the loop: the ability to remotely set temporary basal rates. That is a risk. Some people don’t like that risk, and choose not to DIY closed loop because they don’t want to accept that risk. That’s fine. Other people decide that the reduction in the baseline risks of diabetes due to DIY closed looping outweigh any additional risk, and with appropriate safety guards like backup alarms, hardware and software dosing limits, etc. decide to use these pumps regardless. “YDMV” (your diabetes may vary) applies to what devices and systems you choose to help you with your diabetes, too. I personally choose to use these devices to close the loop, but acknowledge not everyone wants to – and that it shouldn’t have to be this choice that drives (for some people) whether or not to DIY loop. That is why I’ve had active conversations with every pump manufacturer for going on 4 years now about the need to have secure but documented communication protocols: I would love for people (including myself) to be able to have a secure, safe in-warranty pump with which to close the loop. Now: I’m only one person. I haven’t been able to move the needle on this myself. I’ve asked and encouraged (see this visual in the OpenAPS docs) members of the community to also take up and advocate for this. And people have. But I think it’s going to take the resources of something like the JDRF Open Protocol Initiative to really get companies to finally focus on this. And hopefully this will make the infrastructure changes needed to make it possible to achieve the vision of having a secure, in-warranty modern pump (and one that comes with the ability to choose your preferred CGM and preferred closed loop algorithm, too!).

I’ve continued to cut and apply sensor tape “pump bandaids” over the last year. But something changed about a month ago: suddenly, with normal AAA battery changes of the pump, the pump started losing the time settings with every battery change. (And battery changes happen more frequently with DIY closed looping because we communicate so frequently with the pump; mine go around ~6+ days). At first I thought I was just too slow in changing the battery. But even with a lightning quick battery change, the pump would lose the settings. No big deal…except that every time it required me to reset the clock, rewind, and reprime. Which meant drops of lost insulin (ugh), and a hassle overall.

I lasted about a month before I decided to give up. Not only was the change and reset process a pain, but because the internal battery that maintains settings when you change the AAA is apparently dying, it also means that some of the history gets wiped from the pump. Again – not a big deal because I’m uploading everything from the pump to multiple places every 5 minutes, but it is still annoying. It makes it hard to skim back through the last month on the pump to analyze how much insulin I’m using on average, when every 6 days two days get blotted off the pump’s record. 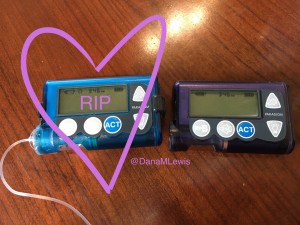 And so, I threw in the towel (sadly) last night on this beautiful, long-lasting work horse of a pump that I’ve been using for 3.5+ years. I have such an emotional tie to it because it’s what enabled me to close the loop. It’s what led us to be able to share DIY closed looping with the world. And because of the reality of using (mostly*) second hand pumps for DIY closed looping, throwing the towel on a partially busted but still-kind-of-usable loopable pump feels wrong when there are lots of people who are desperately looking for pumps so they can close the loop for themselves.

* I say mostly, because there are in fact other kinds of DIY-compatible looping pumps – they’re just not approved or available in the U.S. where I live. The DANA*R or DANA*RS pumps (made by SOOIL, they have nothing to do with me!) have bluetooth capabilities built in, so they can communicate with an Android phone. They’re very popular and usable in places like Europe & Asia, where they’re in-warranty and on the market. They can be used with AndroidAPS (which uses OpenAPS’s oref0 algorithms for looping). Because of the bluetooth comms, no extra device is needed, and the phone with AndroidAPS can communicate to the pump directly. Additionally, the AndroidAPS dev team has also been working hard on evaluating other pumps, and the Roche Combo was recently established as another pump that would be compatible with AndroidAPS; again due to built-in bluetooth capabilities.

Sadly, the DANA*R(S) is not FDA approved in the US and thus not available; and the Combo pump is no longer being actively distributed by Roche in the US (even though it’s approved) – so there are fewer pump options in the U.S. right now. But again, I’m hopeful for more change and more options in the future as the pump companies begin to leverage resources from the Open Protocol Initiative.