The Do-It-Yourself Pancreas System (#DIYPS) is a tongue-in-cheek name that recognizes a serious fact: people with (type 1) diabetes (PWDs) have been acting as their own pancreas for years.  What a healthy pancreas does using subcellular machinery in islet beta cells, and a full closed-loop artificial pancreas system (APS) attempts to do automatically using medical technology, are the same things that PWDs have been doing, on their own, with whatever help they can get.  We recognize that for many PWDs the available help is not yet enough, so we are not waiting.

Medical device companies are working on new Artificial Pancreas Device System components, and researchers are conducting clinical trials of artificial pancreas systems incorporating various levels of closed-loop technology to do anything from automatically suspend basal insulin when BGs are below a pre-set threshold (available now in the Medtronic MiniMed 530G) to a fully closed-loop bionic pancreas system that automatically doses insulin (and even glucagon, in one trial) to provide full 24/7 BG control.  However, full closed loop systems are still years away, so there is a serious unmet need for better tools to help people with diabetes manage in the meantime.

The #DIYPS is designed for immediate deployment, using a device-agnostic web-based interface, and optionally ingesting data from any of a user’s existing medical devices using commodity off-the-shelf hardware (such as a Moto G Android phone connected to a Dexcom G4 via USB).  In fact, interactive use does not even require automatic data upload capabilities: once the system is configured for their insulin sensitivity and other user-specific parameters, a user with any sort of CGM or meter can manually enter BG levels, boluses/injection amounts, and carb counts and get an immediate estimate of their resulting BG levels.  In addition, the system will estimate insulin on board (IOB, meaning insulin still working in the body) and unabsorbed carbs, so a later follow-up assessment only requires updating the BG data to figure out if any additional action is required.

The #DIYPS can be used immediately to empower PWDs to prevent many instances of out-of-range BG levels. 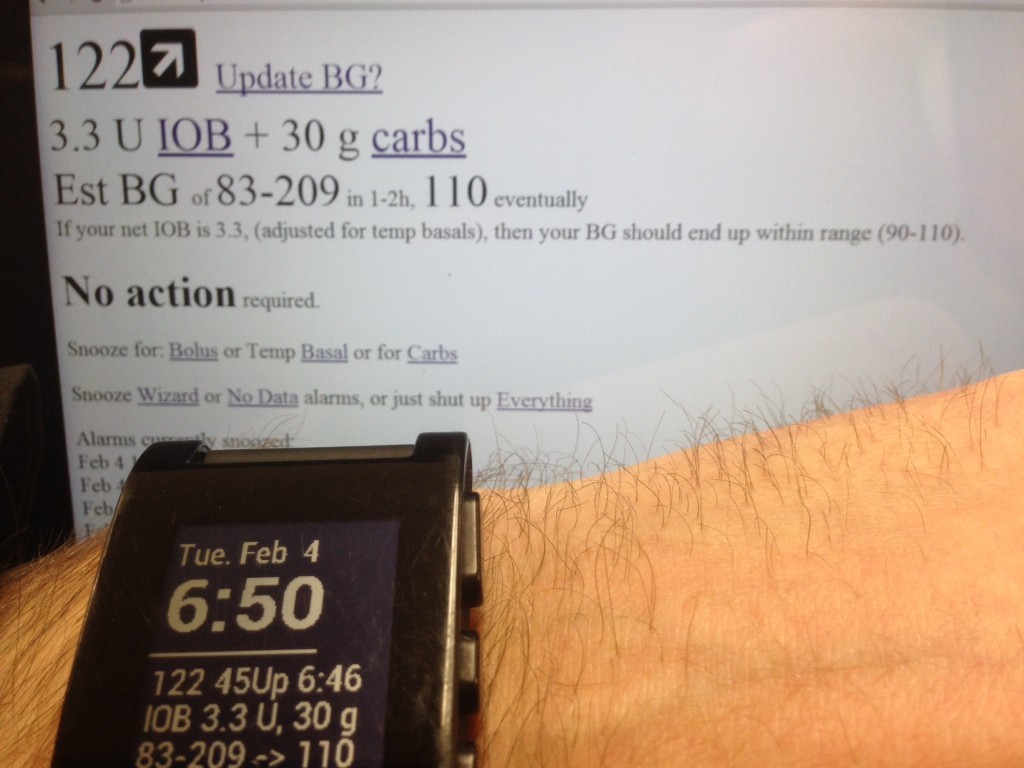 The #DIYPS is not a substitute for a true closed-loop Artificial Pancreas*.  It is not a medical device, and does not dose insulin.  However, it does fill two currently unmet needs.  Firstly, none of the CGMs on the market currently support robust enough alerting features to awaken many patients when they experience low BG while sleeping.  Such nocturnal hypoglycemia unawareness is a serious risk for many people with diabetes, and better tools are required to deal with it.  The MiniMed 530G’s Low Glucose Suspend feature is a huge step forward there, but even it doesn’t help with the converse problem: at other times users will end up going an entire night with high BG, and never wake up to their CGM’s high BG alarms.  The #DIYPS’s alert system certainly cannot replace a CGM’s alarms (it’s not a medical device, and various interruptions in connectivity can prevent it from alarming), but it does have the ability to send notifications that can trigger alarms (i.e. on an iPad or phone) loud enough to wake the deepest sleepers. It can also function as a de facto remote alert or monitoring system, allowing family or loved ones in different locations to check and make sure a PWD is responding to alarms. Until device manufacturers get FDA approval for loud enough devices, this alone is enough reason for many people to want to put together their own alerting system like the #DIYPS – and was the original reason for building it.

Secondly, it is currently completely up to patients (with occasional help from their doctors) to determine how much insulin is required at any given time, and decide when additional carbs are required to prevent a low.  Performing such calculations manually every few hours, without ever being able to take a break, is a major problem for the quality of life of many people with diabetes.  There are very few effective tools available today to help, so such calculations are usually done in the user’s head, and are very prone to human error.  (The few tools available are also often not in one system, creating barriers for effective use.) In addition, many factors such as stress, sickness and varying activity levels can impact BG levels.  This combination of factors often results in frequent (often daily) instances of low or high BG levels.  The #DIYPS system provides a framework to support the user in making the best decision in every situation, while reducing the cognitive load on the user, and reduce the risk from harder-to-calculate factors like stress or varying activity levels.  It also helps the user to pay more attention and take action when they are at risk for hypoglycemia (predicted based on CGM, IOB, and carb data input into the system), while allowing them to continue living their life normally, with less worry about managing diabetes.

Finally, the #DIYPS system is designed to be device and data source agnostic, and to integrate with frameworks like Tidepool to allow users to do things that have never been possible before.  As new and better medical devices are released, our hope is that all of them will support methods for allowing a user to export their own data, so that users can truly take advantage of all the innovation we are starting to see in this space.

But today, the #DIYPS is just a prototype system, and has only been development tested with a single user.  In order to determine whether it can truly fulfill the unmet need described above for a wider population, additional development and testing are required.  At this point, we are looking to begin collaborating with anyone who has the skills and interest required to move the project forward.  We are not yet ready to begin allowing (and helping) a large number of users to begin testing the system themselves, but hope to open it up (and hopefully integrate it with the efforts underway at Tidepool.org, among others) in a manner that will allow as many people as possible to begin safely using the system as soon as possible.  However, this is currently only a 2-person side project, so if you think it’s worthwhile to move forward more quickly, I would encourage you to get involved (if you have technical or other skills that would be helpful) or pass along the word to others who might be interested and able to help.  (And if you haven’t already, you might also want to read How I Became a DIY Artificial Pancreas System Builder.)

P.S. A special thank you to John Costik, who graciously provided the drivers we’ve been using to pull data off the Dexcom CGM to a Windows PC, and who is working on perfecting the Android (Moto G) drivers as well.  We wouldn’t have done any of this if it wasn’t possible to get data off the Dexcom CGM in real time.  We’d also like to thank members of the diabetes online community for their support, encouragement, and feedback: we know y’all will be pivotal in driving this forward.

*Update in December 2014: We wrote this post in February, when #DIYPS was truly a “human in the loop” decision-assist system. However, as of December 2014, we closed the loop with #DIYPS, and also have a version of #DIYPS that is essentially a closed loop artificial pancreas. You can read more about our work on the closed loop artificial pancreas version of #DIYPS here.

19 thoughts on “A DIY Artificial Pancreas System? Are we crazy?”