I’ve now run two ultramarathons (both happened to be 50k races, with a race report for the second race here), and was planning my third ultrarace. I had my eye on the 50 mile (50M) version of the 50k I ran last year. It’s on a course I adore – a 6 foot wide crushed gravel trail that’s slightly uphill (about 1,000 feet) for the first 30 miles and then downhill at 2% grade for the remaining 20 miles. It happens to be close to home (hour and a half drive to the start), which helps for logistics.

I started training for the 50M weeks after my 50k this year, including talking my husband into taking me out to run some of the segments along the first 25 miles of the course. I’ve done the back half of the course several times through training and racing the 50k, and I wanted to check out each of the earlier segments to get a sense of what trail bathrooms existed on the course, make notes about milestones to watch for at various distances, etc.

After the first training run out there, when I started talking goal paces to get through the first and main cutoff at mile 30 (cutoffs got progressively easier from there, and even walking very slowly you could finish if you wanted to), my husband started to suggest that I should just run the course some other time on my own, so I didn’t have to worry about the cutoffs. I told him I didn’t want to do that. The cutoffs are a good incentive to help me push myself, and it’s worth the stress it causes in order to try to perform my best. (My target pace would get me through a comfortable 15 minutes before cutoff, and I could dial up the effort if needed to achieve cutoff). However, he suggested it another time and pointed out that even when running an organized race, I tend to run self-supported, so I don’t really don’t benefit as much from running in a race. I protested and talked again about the camaraderie of running when everyone else did, the fact that there were aid stations, the excellent search and rescue support, the t-shirt, the medal, the pictures! Then out loud I realized that I would be running at the back of the pack that I would miss the pictures at 25 miles because the photographer heads to the finish before I would get there. And they stop finish line pictures 3 hours before the end of the race. (Why, I don’t know!) And so I’d miss those photos too. And last year, I didn’t partake in the 50k staffed aid stations because I couldn’t eat any of their food and didn’t want any extra COVID exposure. Instead, my husband crewed me and refilled my hydration at two points on the course. The un-staffed aid stations didn’t have the plethora of supplies promised, and one race report from someone near the front of the pack said they were low on water! So it was a good thing I didn’t rely on the aid stations. I didn’t wear the tshirt last year, because it wasn’t a tech tee. Medals aren’t that exciting. So…why was I running the organized race?

My only remaining reasons were good search and rescue (still true) and the motivation of signing up for and committing to running on that date. It’s a commitment device. And my husband then smashed that reason, too, by reminding me that the only commitment device I typically need is a spreadsheet. If I decide I’m going to work toward a goal, I do. Signing up doesn’t make a difference.

And so I decided to give it some thought. Where would I run, if I could run anywhere in an hour’s distance from home? Do the same 50 mile course? Was that course worth it? Or was there somewhere closer to home where I could run that would be easier for my husband to crew?

He suggested running on our “home” trails, which is a network of hundreds of miles of paved trail that’s a short walk away. I immediately scoffed, then took the suggestion seriously. If I ran “from home”, he could crew from home and either drive out or e-bike out or walk out to bring me supplies along my route. If the park trail bathrooms ended up getting locked, I could always use the bathroom at home (although not ideal in terms of motivating myself to move quickly and get back out on the trail). I’d have a bigger variety of fueling options, since he could microwave and bring me out more options than if it had to be shelf-stable.

The list of benefits of potentially doing my own DIY or self-organized ultra grew.

(And then, I broke my toe. Argh. This further solidified my willingness to do a DIY ultra, because I could train up until when I was ready, and then run my distance, without having to choose between a non-refundable signup and not running or risking injury from running before I was ready.)

Eventually, my plans evolved (in part due to my broken toe). I was originally going to DIY a 50M or 100k (62M) over Labor Day weekend, recover, then re-train up and run a DIY 100 mile (100M) in late October or early November. When I broke my toe, I decided to scratch the “test” 50M/100k and just train and run the 100M, since that was my ultimate goal distance for the year.

Here are the pros of running a DIY ultra or a “self-organized” ultra, rather than an organized race with other people:

Here are some of the cons of running a DIY ultra or a “self-organized” ultra, rather than an organized race with other people:

All in all, the benefits pretty clearly outweigh the downsides – for me. Again, I’m a back of the pack super slow runner (in fact, I typically run 30 seconds and walk 60 seconds throughout my whole race consistently) who can’t eat aid station food (because celiac/EPI makes it complicated) coming off of a broken toe injury (which messed up my training and racing plans), so my pros/cons lean pretty heavily toward making a DIY/self-organized solo ultra run an obvious choice. Others might have different pro/con list based on the above variables and their situations, but hopefully this helps someone else think through some of the ways they might decide between organized and un-organized ultramarathon efforts! 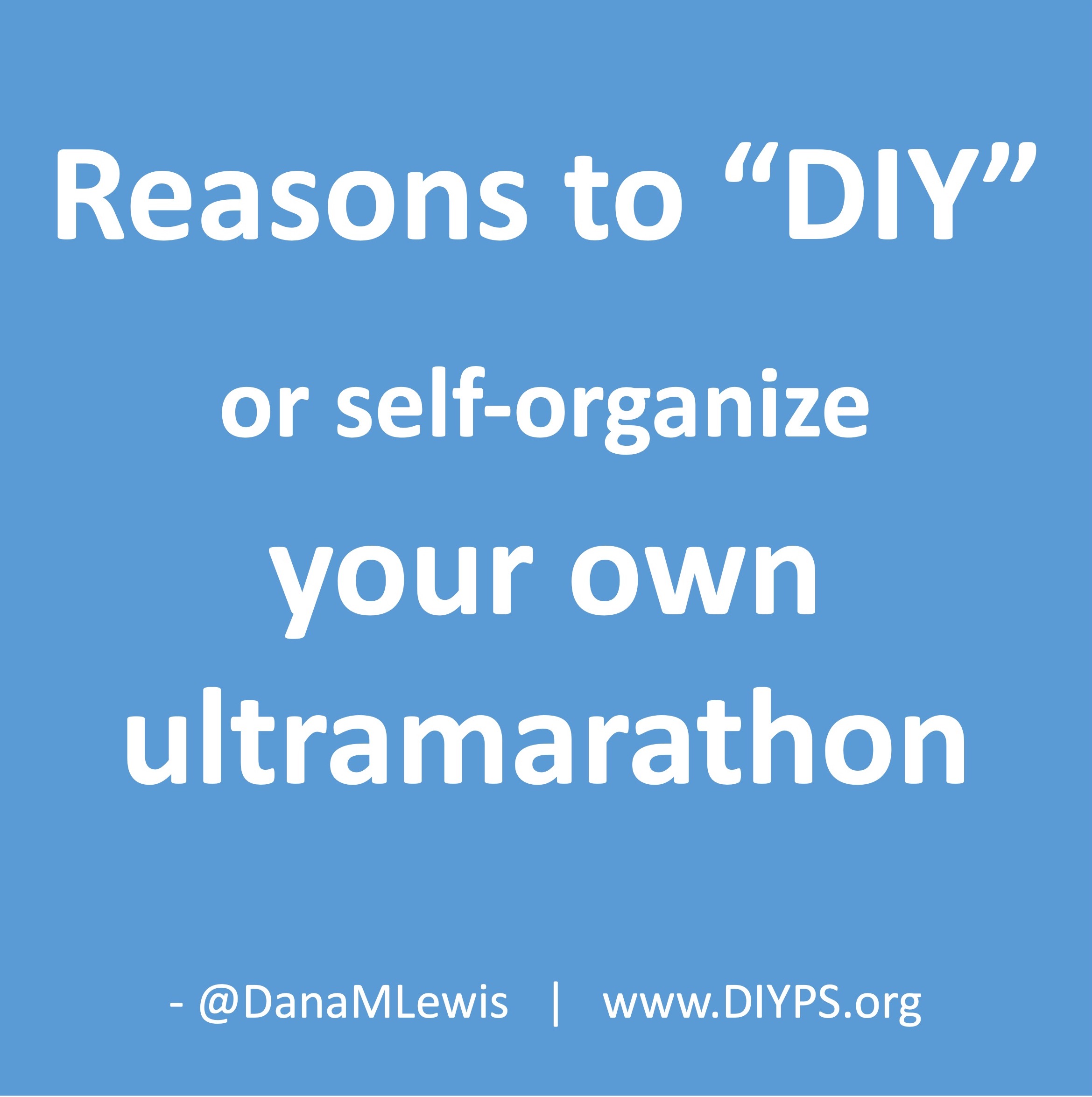